I have completed the sixth and final container pod for the Container Spaceship project.

For a bit of variety and with a nod to the Hunter Gratzner spaceship from the movie Pitch Black I made a double decker storage tank pod. The profile echoes the shape of the existing containers.

The tanks are  two lengths of 75mm PVC pipe with heat formed 2mm styrene elliptical vessel heads at each end. I first made a buck from 10mm foamed PVC by spinning it on my mini lathe with a long M5 bolt, washers and nut as a mandrel. It was shaped with a sanding stick and then skinned with thin super glue wiped on using a disposable rubber glove as it slowly rotated on the lathe. This skin was then fine sanded and re-applied and fine sanded again. 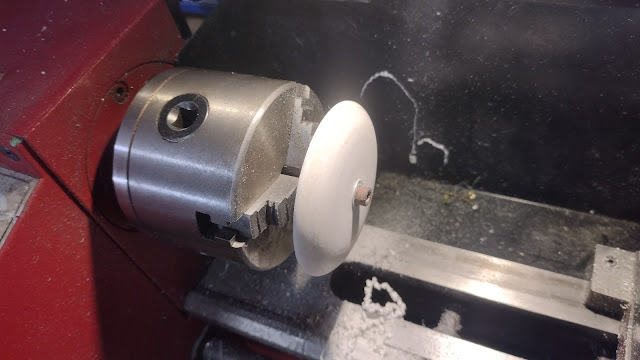 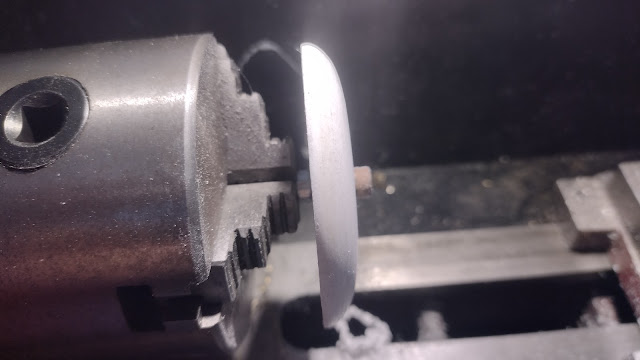 The dome shape was then stuck to a circle of 6mm foamed PVC to increase the height and then stuck to a base of scrap plywood. The diameter was made to be about 3mm less than the OD of the PVC tank tubes to allow for the thickness of the 2mm styrene when heated and stretched over the buck.

Another piece of scrap 9mm plywood with a roughly 75mm diameter hole was used as a support for the 2mm styrene while heating withe a heat gun and pressing over the form when soft. To adhere the styrene blank to the plywood I used drops of  thick super glue which as I only needed 4 caps worked fine the fewer drops the better for removing it once cooled. 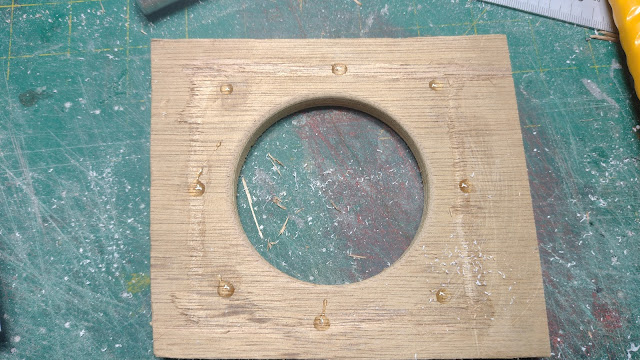 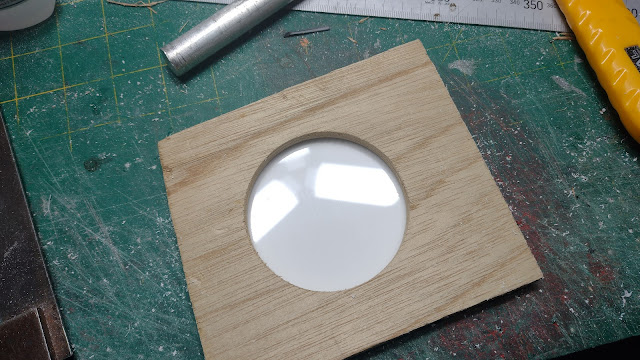 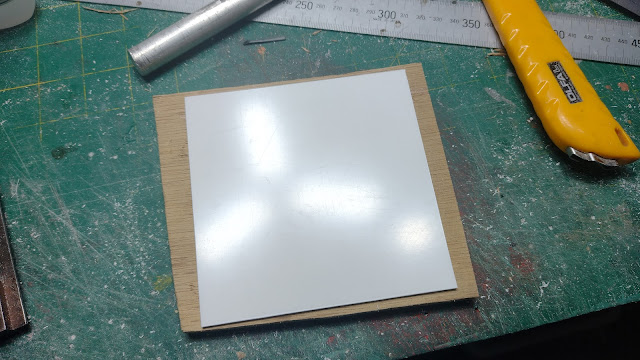 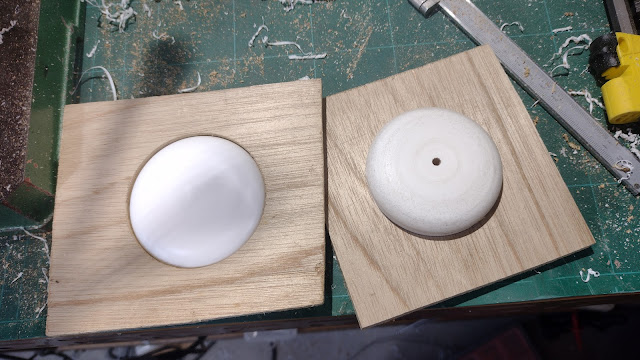 Styrene when heated will initially start to warp and wrinkle slightly before it then tightens back up and appears rubbery when wiggled or tapped. The rubbery phase is when the heat is removed and you push the styrene over the buck so it is pressed up through the hole and let it cool.

The first one I tried was 1.5mm ABS and it just bubbled and sagged straight away so I switched to the 2mm styrene and they all came out well. Each cap was cut off using a flush cut Zona saw and the edge squared off on a flat sanding board. They were then superglued to  each end of the PVC tubes. 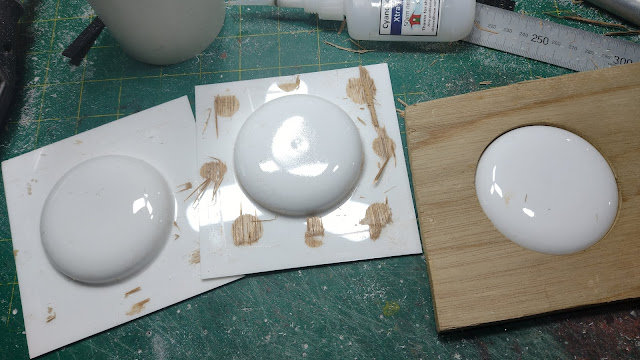 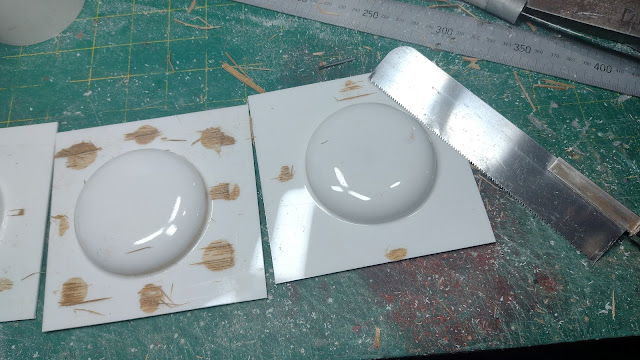 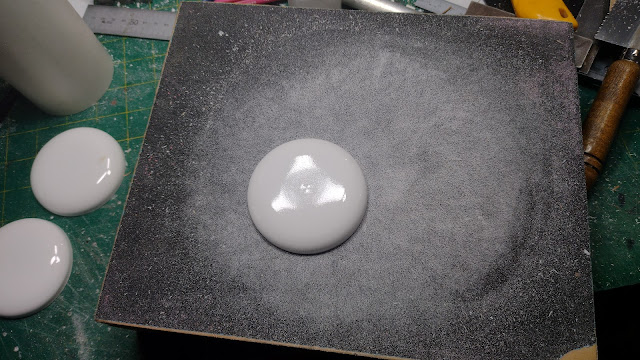 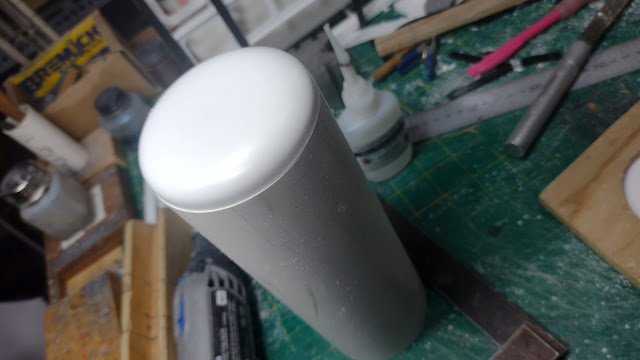 The rest of the structural formers of the pod were designed on Libre CAD and printed out full size on paper and stuck onto 2mm styrene for cutting out, first drilling out all the corner radii with a step drill. 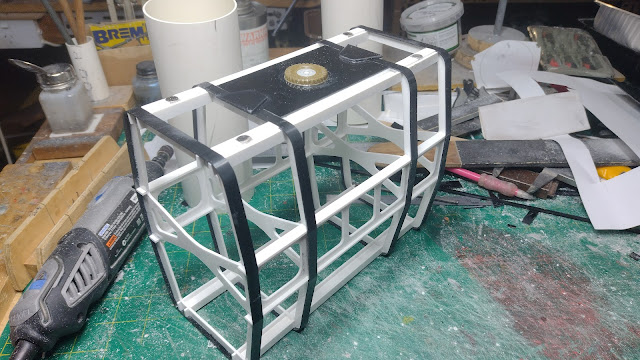 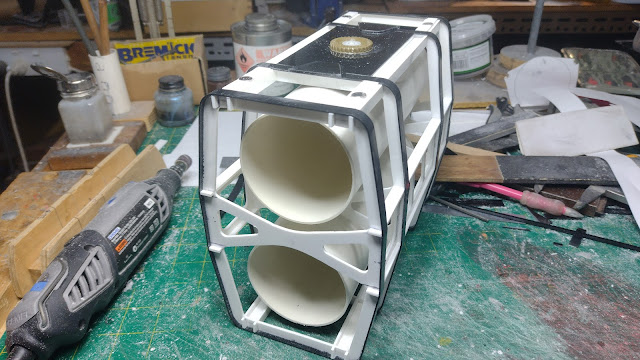 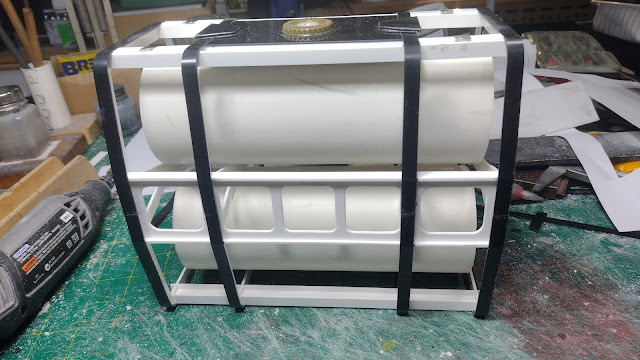 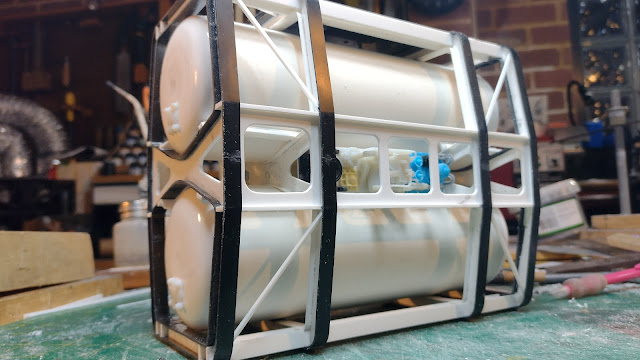 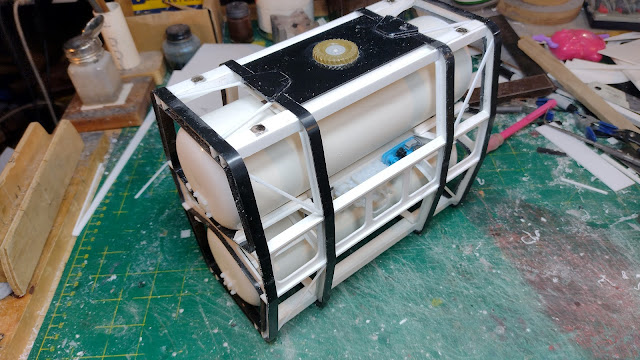 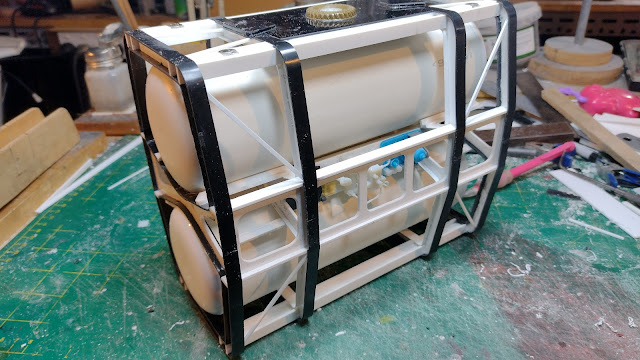 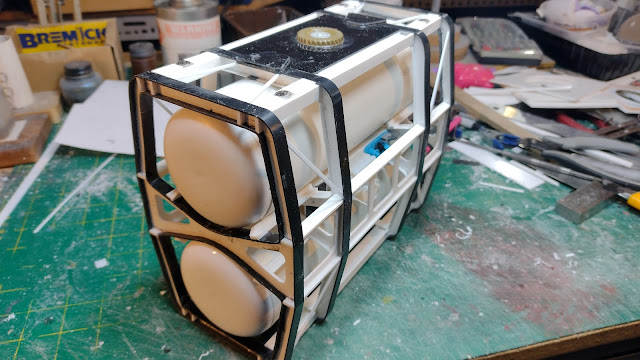 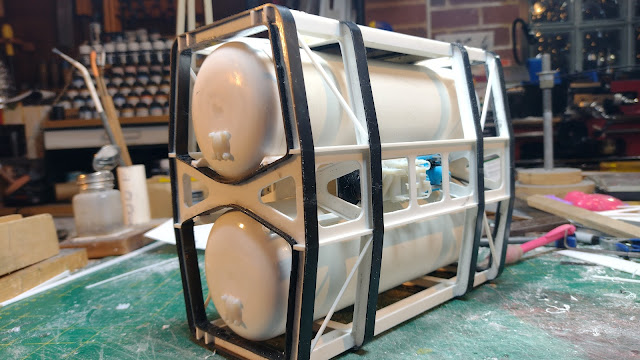 The detailing panel comprised some reject resin printed parts I was given and a part from a disposable camera along with some random kit parts. The Universal Greeblies on the end of the tanks were part of the reject 3D printed parts and are probably at least 5 times the diameter of the kit parts from the 1/72 Hasegawa Leopold kit. 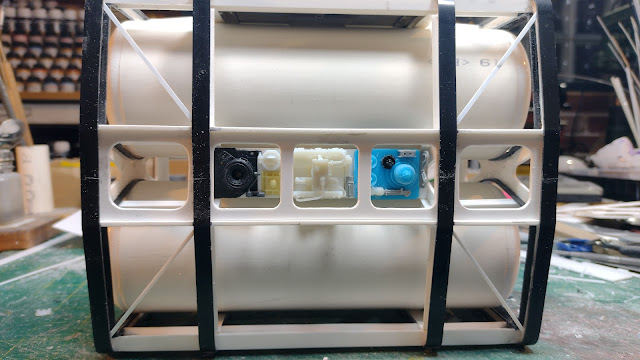 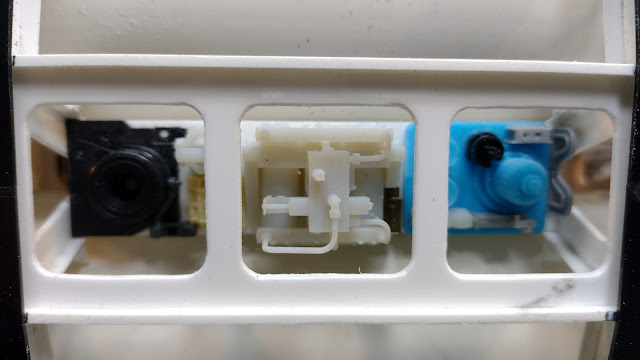 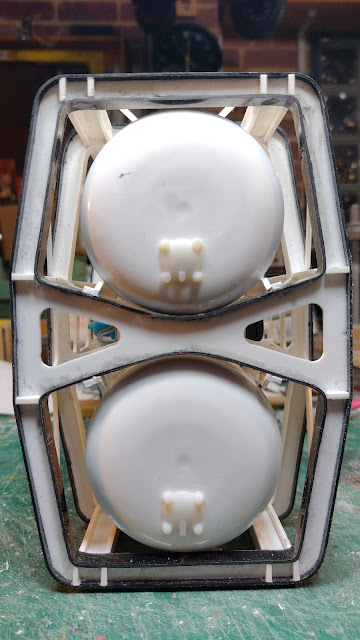 It was sprayed with primer grey to check the final result of the construction. It has the same 4 magnets as the rest of the containers so it can be clipped into any of the 6 positions under the hanging deck. 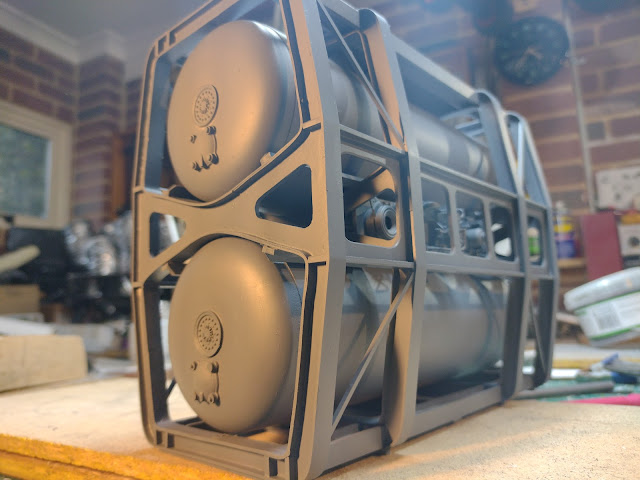 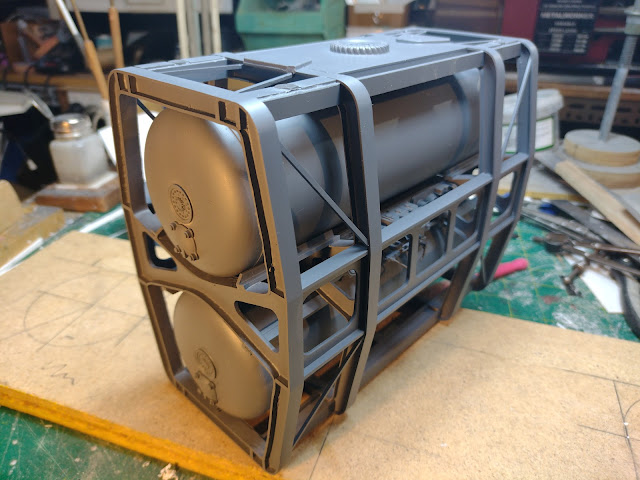 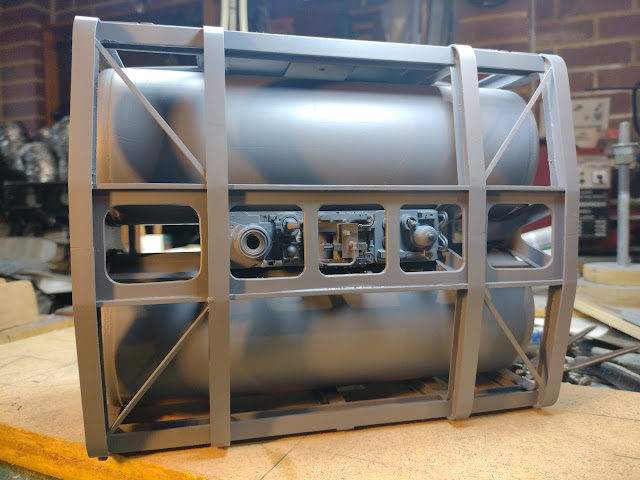 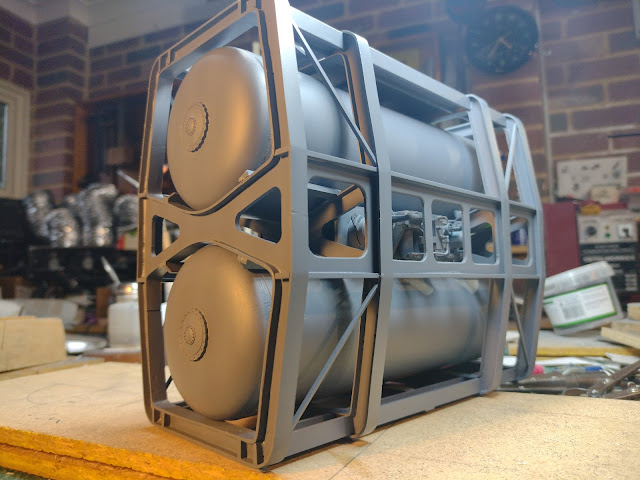