Finally got some primer on it, after completing the detailing process. I filled in some of the gaps underneath with an extra large tank and equipment box per side. The body was lightly sanded with fine wet and dry and washed with hot water and dish-washing detergent to make sure the paint keys nicely. 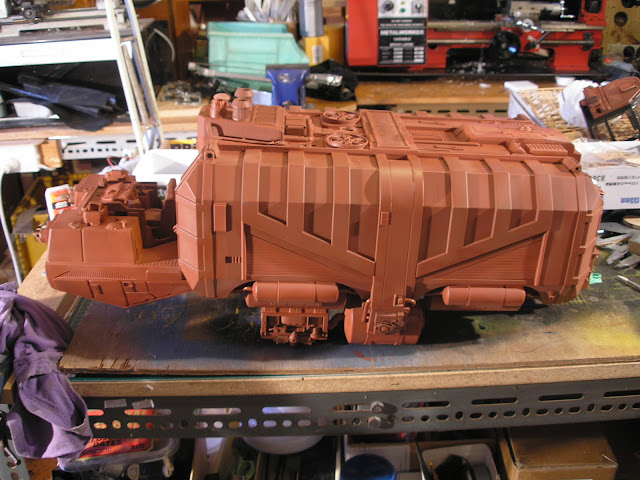 The bit of detail above the large tank is from a disposable camera, in fact the little dome shape was the lens. Disposable cameras have a pile of interesting styrene parts in them, and photo shops are only too happy to give you a bag full as they are just thrown away. I originally got a pile of them to scavenge the flash capacitors inside them which were used for some DIY valve guitar amp projects. One thing you have to be careful of when disassembling them is the capacitors can hold quite a charge and will give you quite a shock that is very unpleasant, I speak from experience. I wouldn't recommend going near them if you have any form of electrical sensitivity. 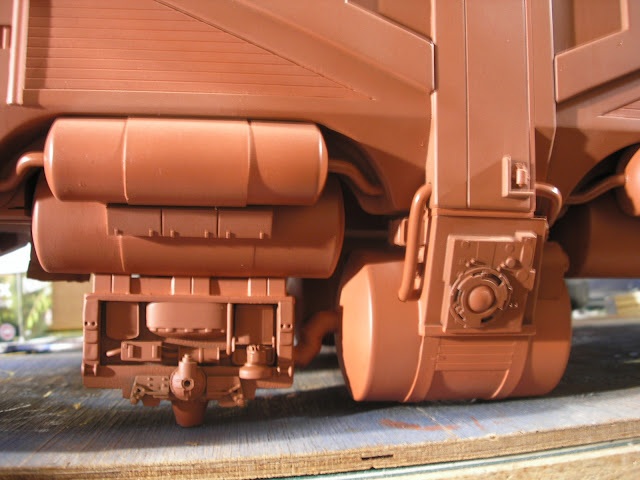 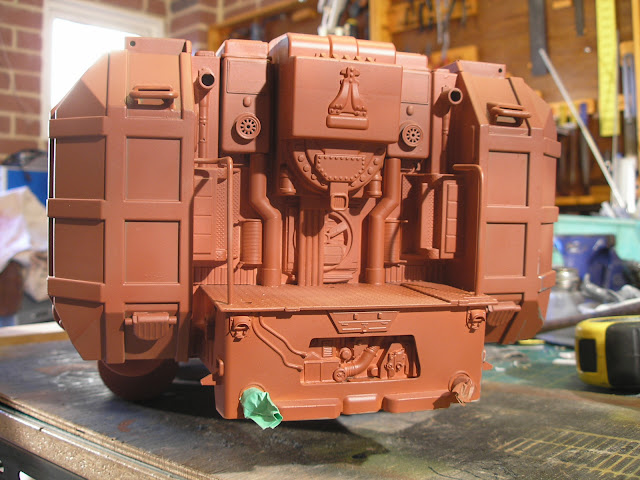 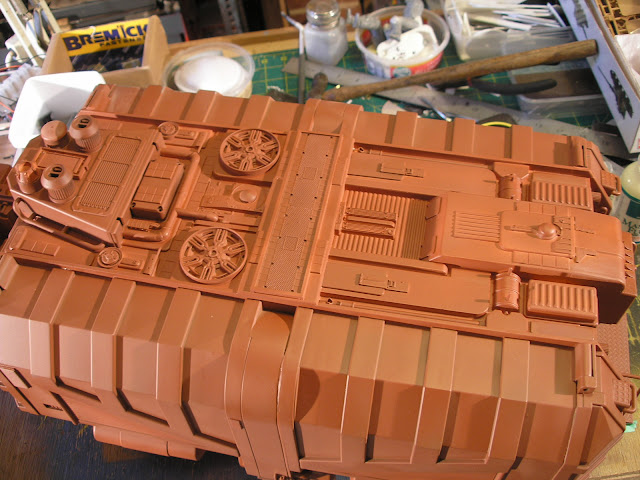 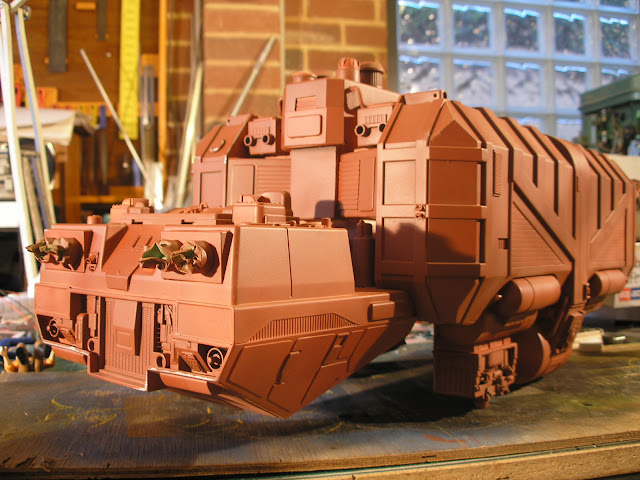 My finger hurt after spraying three quarters of a large can of red oxide car primer on it.

I have started going over the edges with a silver paint pen. Liquid mask (latex) will then be brushed over this so that the edges will appear pretty scraped up revealing bits of bare metal and primer under the top coat.
The current plan is to paint the sides orange ( a colour called tango) with the middle and underneath detailed sections a dark grey (primer). 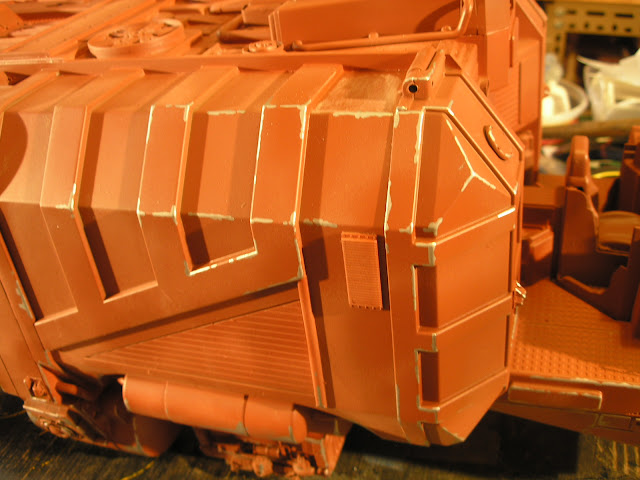 To test out my idea of one geared motor per wheel in a spin steer vehicle I built a quick chassis out of wood.
The purpose was to test whether the speed controllers ( dual Traxxas EVX) could handle the load and if the gear ratio was suitable for different sized tyres.
The motors are the cheapest  I could find on ebay from China. They are brushed 12 volt 540 can motors with an inline gearbox supposed to run at 500 rpm unloaded. The output shaft is 6mm and runs on a plain bearing.
I had previously estimated that 400 rpm would be about the right top speed required by bolting a wheel to my cordless drill which has a 2 speed gearbox. The lowest speed is 400 rpm and that seemed about right as i ran it along the ground. I decided that perhaps a bit extra might be required so I purchased the 500 rpm units.
There is no suspension at all, with each motor /gearbox unit strapped into some circular holes in the frame.
Each EVX controller is hooked up to the three motors per side in parallel.
One of the controllers has its red wire removed from the receiver plug so only one BEC is being fed to the receiver.
I had already tested the current draw of the motors which is less than 2 amps no load and just over 4 amps loaded, so the EVX speed controllers should be more than capable of handling at least 4 of these motor/gearboxes.

I  first tested a set of Axial oversized beadlock wheels (3.8)  with Losi ATX 420 tyres, followed by Imex Jumbo Maxx Chevrons which are a slightly smaller circumference. I then bolted on some massive RC4WD Interco Super Swamper 40 series TSL/Bogger scale tyres mounted to my homemade PVC wheels, click the link to read the post- Giant-tyres-and-pvc-wheels 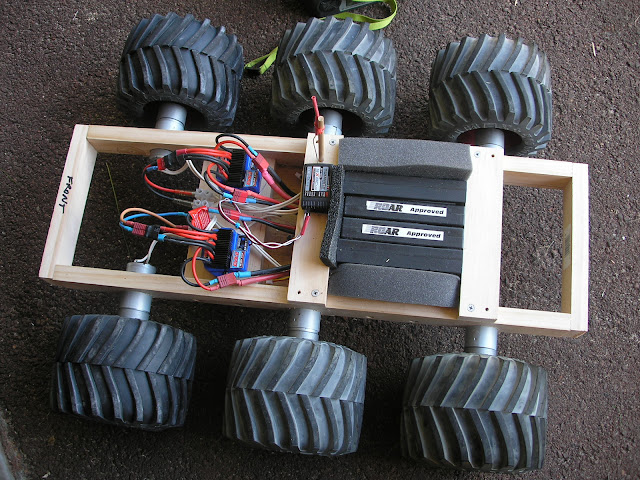 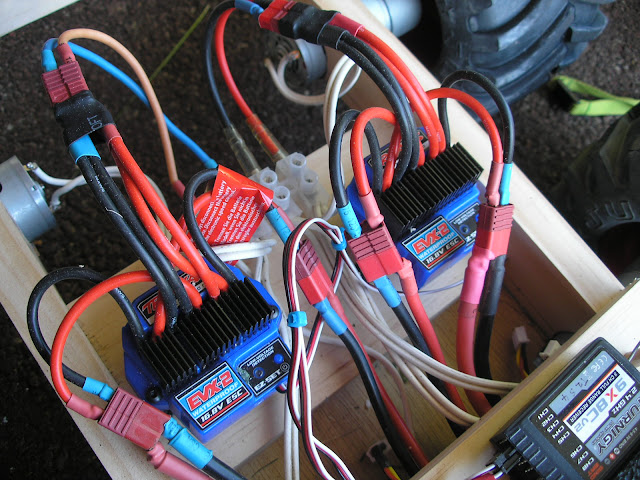 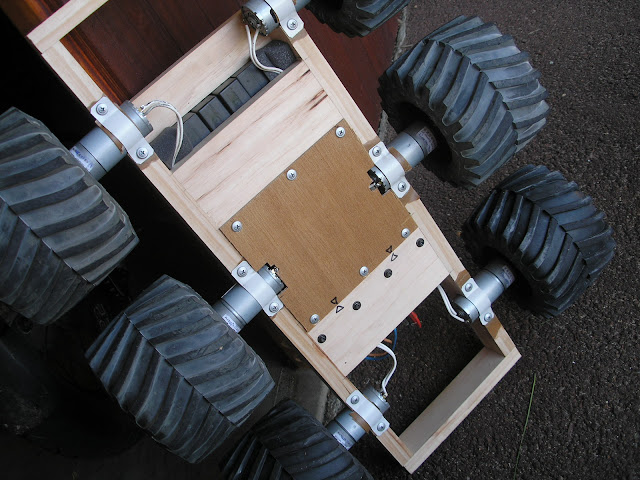 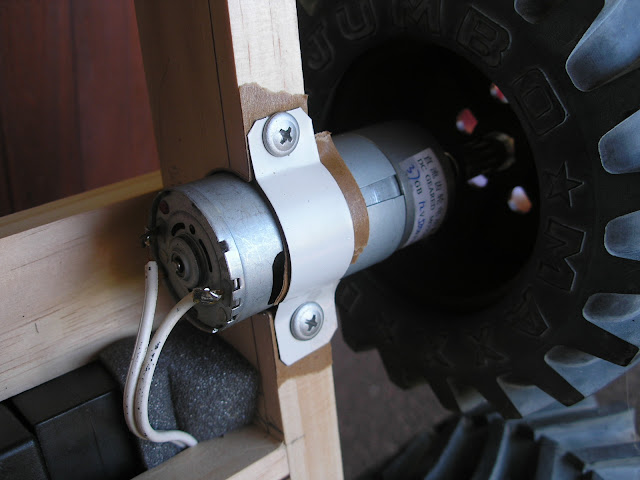 I used my Turnigy 9X radio that I modified to have a return spring on both sticks. Push both sticks forward for straight running. To turn you pull one stick back to brake that side. The EVX speed controllers have a brake system so the stick has to be brought back to brake, then returned to neutral and brought back again to get reverse. This is not ideal, instant reverse would be preferable ( at the cost of potentially tearing up the gearbox) but despite this it does work and you get used to controlling it this way. A gentle tap on the brake on one side gives you a gentle turn. Further manipulation of the sticks allows the full spin steer where one side is in forward and the other reverse spinning the vehicle on the spot. 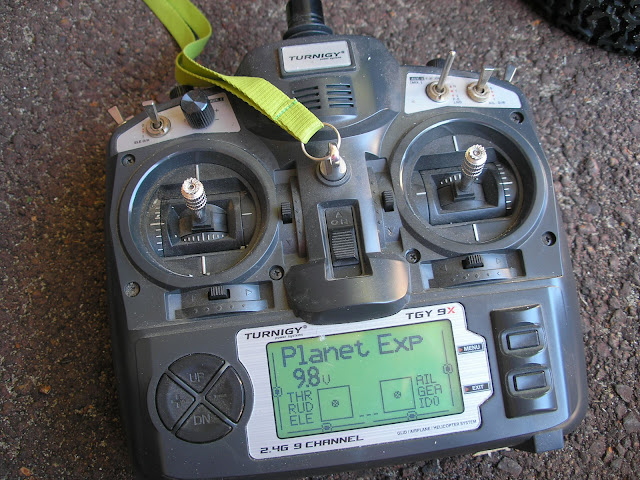 I also added a Life battery and added a Smarty Pants board to replace the firmware with Open TX. 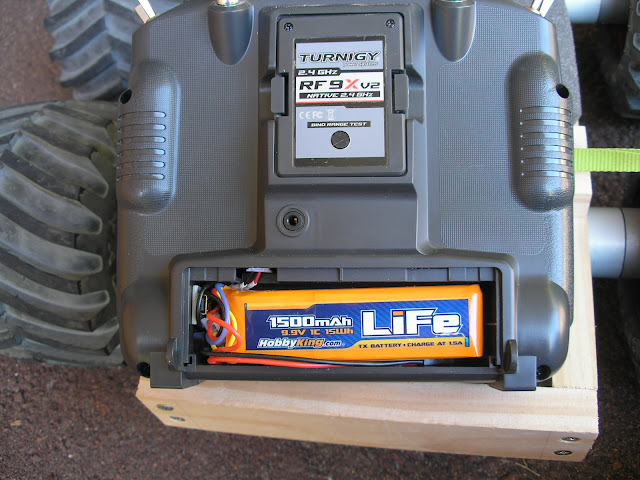 The losi ATX 420 tyres mounted to Axial Oversized beadlocks required some grinding of the bead to fit well. The Axial beadlocks have a wedge shaped receptacle for the bead whereas the tyres have a rectangular bead. The inner edge needs to be chamfered. A sanding drum in the drill press did the trick. 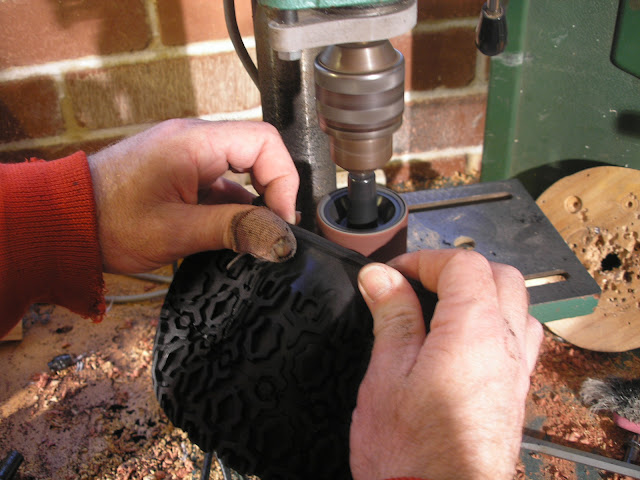 I like these tyres, they are relatively cheap, grippy, seem to be able to cope with on and off road and make a great tyre squeal sound when rubbed along the floor. As a bonus they look very SCI FI. 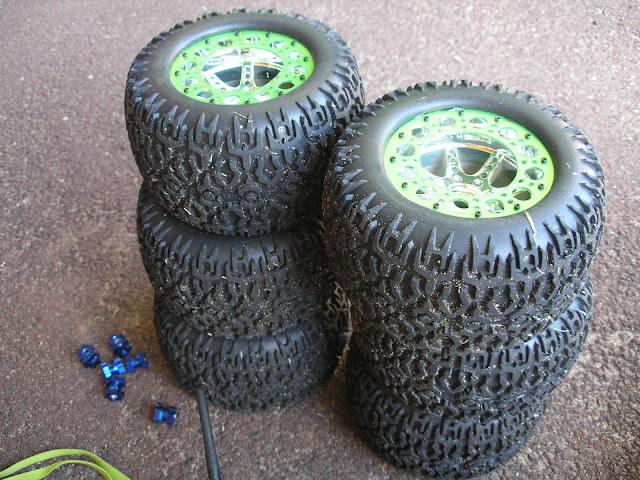 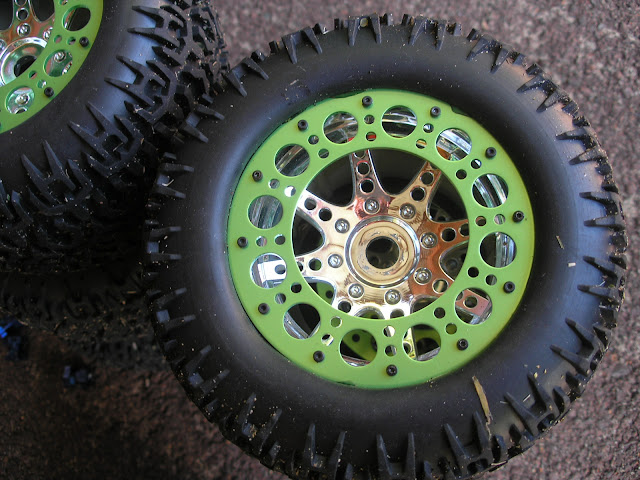 The Imex Jumbo Maxx wheels were attached to the 6mm gearbox shafts with some modified 14mm hex wheel wideners. I tapped the hole for the axle pin for a M4 grub screw. I wish I could find shorter versions as they really dont need to stick out so far, in fact there would be less sideways load on the plaiin bearing if it wasnt so long. 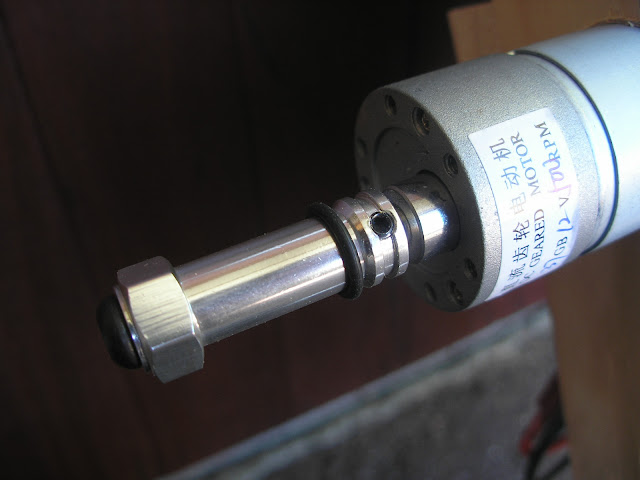 The Axial beadlocks were attached with some modified Traxxas 17mm hexes which were drilled out 6mm for their whole length to fit over the shafts. This is much better as it is close to the bearing.
A ball bearing supported shaft would be much better mechanically here, but a quantity of quality motors and gearboxes is way outside my budget. 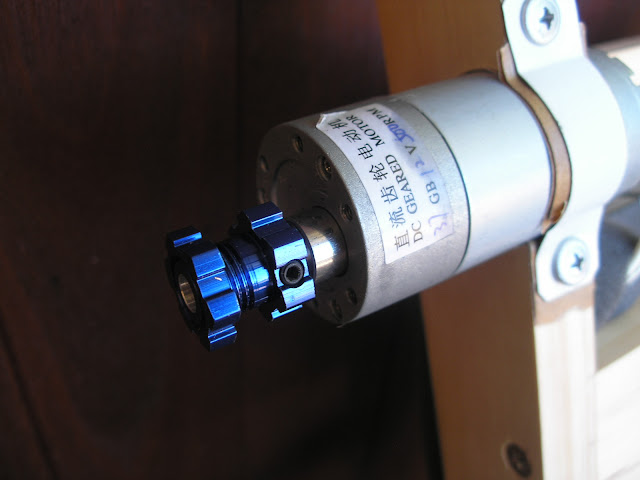 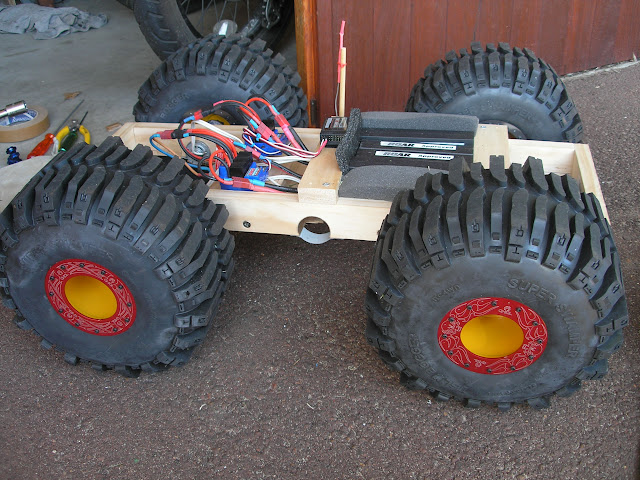 Here you can see the Losi 420 tyres against the Boggers. I still cant get over how bloody enormous they are. They are also very a very heavy mass to rotate.
The Losi 420 tyres have a circumference of 564mm whereas the Boggers are 793mm, that is 1.4 times more. It means that the gearbox should be geared down by that amount. I figured that 500 rpm probably would be a poor match for these wheels. 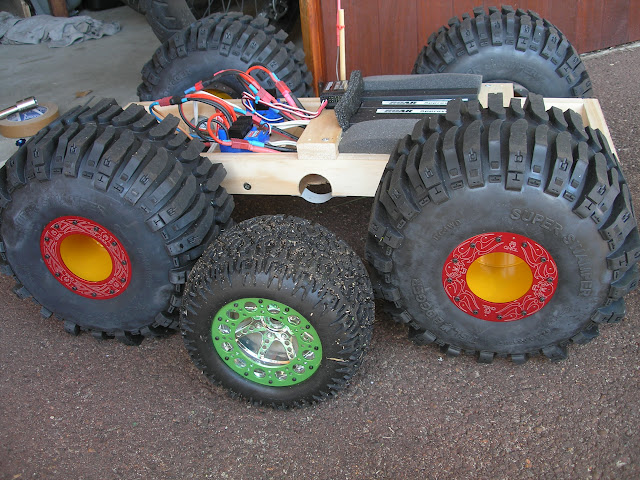 The results of testing showed that for the Imex Jumbo maxx and the Losi 420 tyres 500 rpm gearbox is about correct for a bashing style of driving. I think my first estimate of 400rpm would be better for a more controlled style that I am after for these SCI FI vehicles which are not really about speed. Even with these 500 rpm gearboxes the speed controllers and the motors barely got warm, so I have no fears about adding and extra motor per side for an 8X8.

With the Boggers the motors did manage to turn the wheels but, as predicted, the motors got very hot quickly. If 400 rpm suits the 420 tyres then 0.7 times 400 which is 280 rpm should suit the Boggers.
You can get 200 rpm or 300rpm gearboxes so depending on whether you choose speed  or torque you could go either way.
I will probably go 200 rpm as I'm after climbing ability over speed.
Given that I have the 500rpm motors I will use them for a 6X6 I have planned and have a couple of spares.