Here's a new project that for me has come together rather quickly due to its relatively small size and the fact that the toybash donor is already covered in much sci-fi like detail.

I stumbled across a youtube video of the Tamiya Kong Head 1/18 scale RC vehicle tearing about with what looked like rock crawler wheels and tyres mounted in place of the stock ones. Given that I am quite partial to 6X6s, I investigated further and found the parts to build the chassis could be had for around $150.00 (Australian) on eBay.  I also had 6 Venom creeper wheels spare and picked up 3 pairs of the tyres at runout prices. Once the parts arrived I assembled the chassis stock and then discovered the 2.2 inch wheels and tyres don't fit they are too big for the small stature chassis and it must have been 1.9 inch wheels and tyres on the video. Well as it happens I have a set of 5 axial 8 hole 1.9 beadlock wheels with Proline Flat Iron tyres fitted and unused, all I need to do is get a 6th tyre and wheel and Frank's your Auntie.
Unfortunately you cant get the original Flat Iron tyre any more at least I couldn't find one, as Proline now only seem to make a newer XL version which is bigger and doesn't match. Trawling on ebay the cost of 6 new 1.9 tyres was more than I wanted to spend but I stumbled across a set of Venom 96mm diameter beadlock wheels and 1.9 tyres going cheap and looked like they would suit the project so I snapped up 3 pairs. 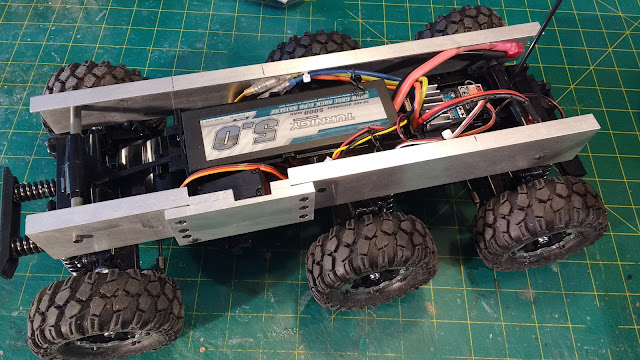 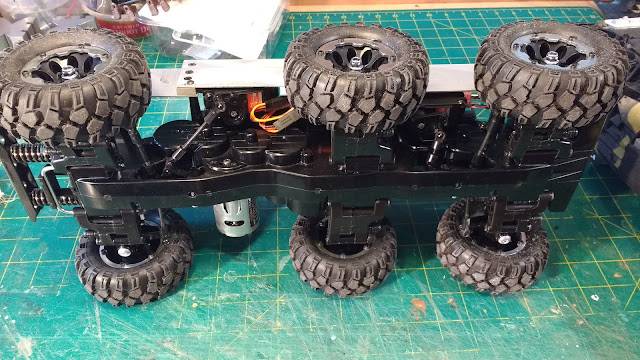 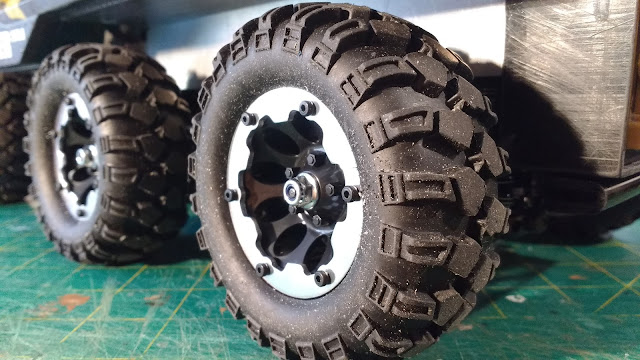 I added a couple of lengths of aluminium angle to the Tamiya chassis using the existing side protrusions, the front and rear needed some PVC rod spacers. This provides a level platform to attach the body work. One side had to navigate around the front steering servo, so was made from three bits of angle bolted together with some 6mm PVC sheet spacers. The Kong Head comes with extra parts to make the rear most axle steer as well and improve the turning circle, which I made full use of adding a second servo. I purchased 4 so called 30kg servos from BangGood and in testing on a servo tester work very well, once mounted in the vehicle with the Tamiya ESC  turned on however they twitch a fair bit at idle. I might try a separate bec to see if that cures the problem.

The body is principally comprised of a charity shop find, a toy Assault Amphibious Vehicle or AAV. Here's what it would have looked like originally in the shops. I just got the hull itself from the charity shop. Somthing was rattling around inside and a couple of parts were missing. When I removed the screws and opened it up I found a blue plastic dinosaur inside. A number of  parts on the toy were made from either poly polypropylene or polyethylene and as is my usual policy with these materials were discarded.

It came apart in two halves and I did the usual thing of widening it by inserting lengths of black 2mm styrene. I also extended it lengthwise by around 50mm in the middle. 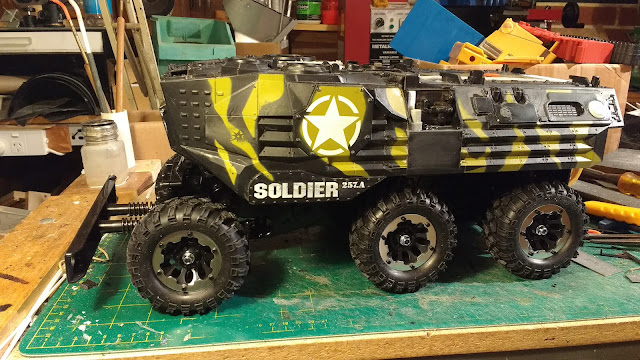 I found that the part of the hull that says soldier fitted very conveniently between the front and middle set of wheels and looks like it was designed that way. The middle length extension is denoted by the black panel on the side. I added a step here and filled it with kit part detailing. Some very obvious moulded in rope detail on this side and some pick and shovel detail on the other was dremelled and sanded off. The resulting holes were covered with styrene panels or as is the case on this left side made into a recessed vent. I also started adding detailing to the top surface. 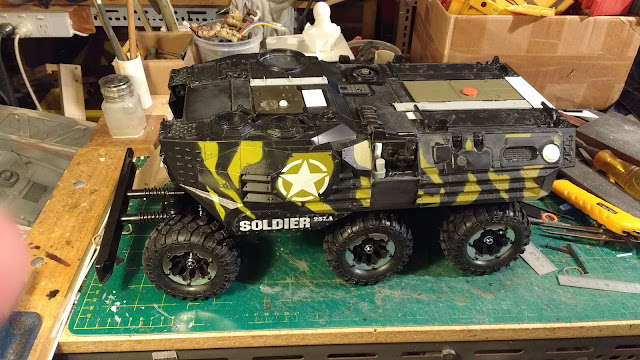 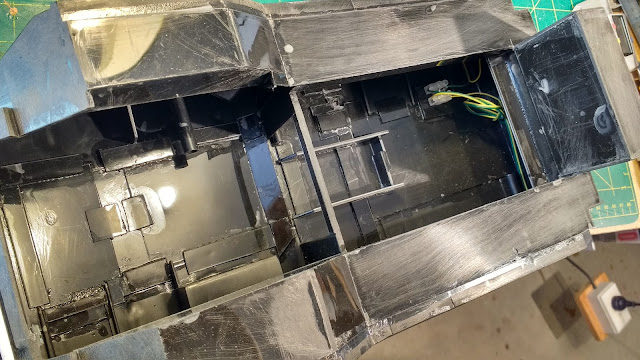 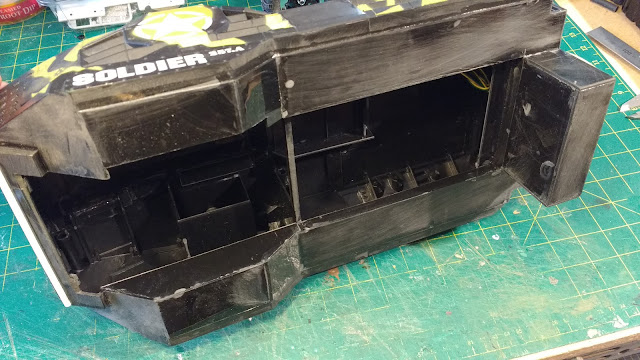 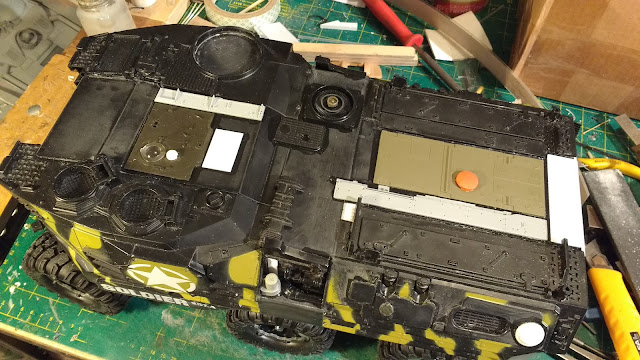 The rear was boxed in to fit around the chassis and a loading door started with a part from a Wall-E toy, another charity shop find. 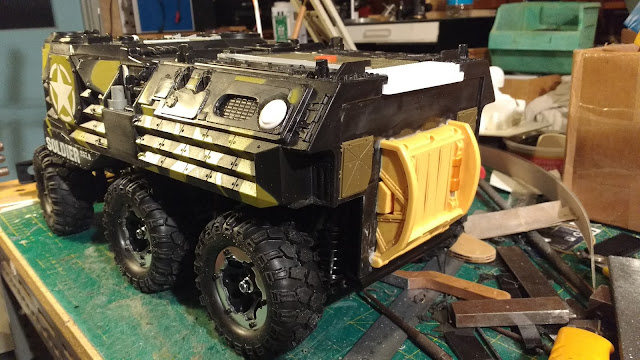 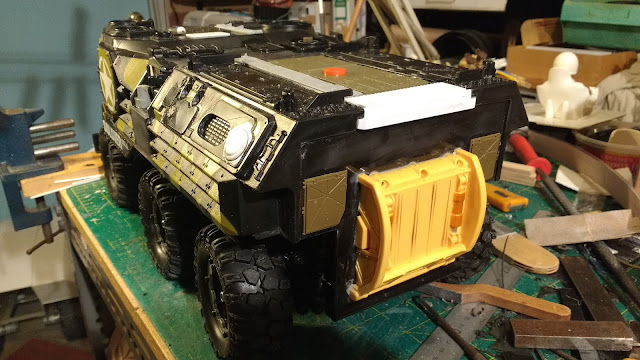 The work continued with more detailing and the construction of a suitable cab. The Tamiya Kong Head is nominally 1/18th scale but I decided to boost it up to my favorite 1/16 scale in line with most of my vehicle projects. The cab still has more work to do on it both exterior and interior so for the moment it is separate from the rest of the body. 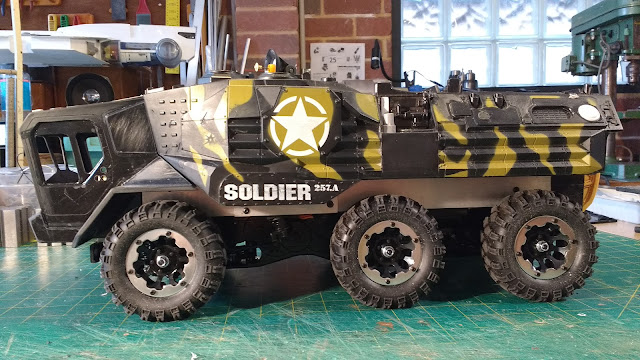 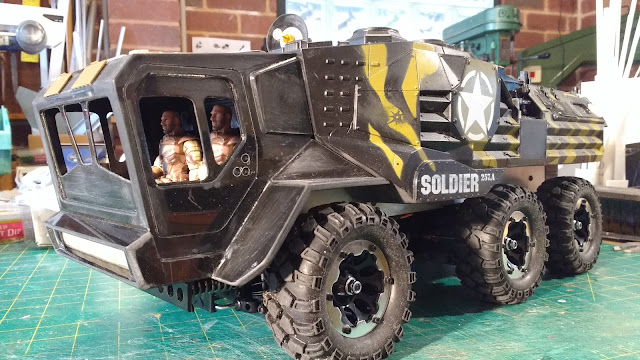 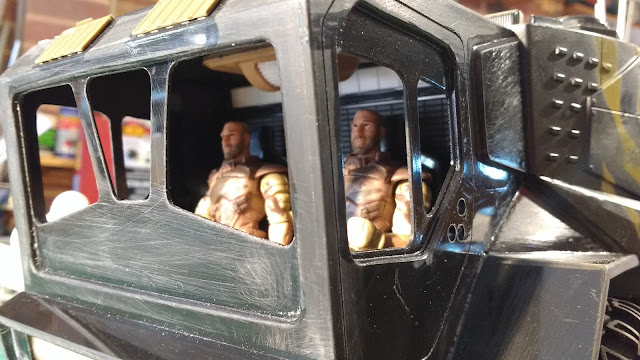 I decided to use some cheap figures from Target in the cab. They will need some paint work in order to not look like clones. The seat they are mounted on is removable so I can build in a console of some sort and glue in some windows. The three holes in the door are to make a recess for a door handle. The front of the cab has a short piece of 12volt LED strip consisting of 6 lamp nodes. 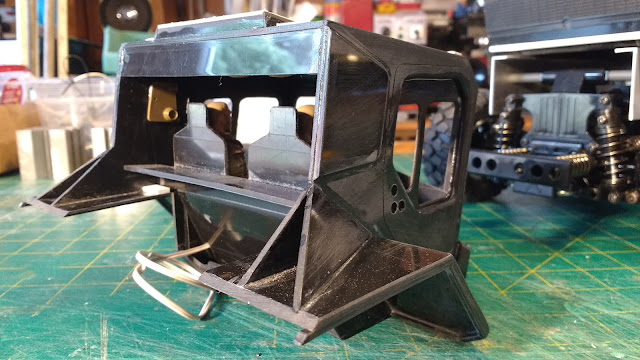 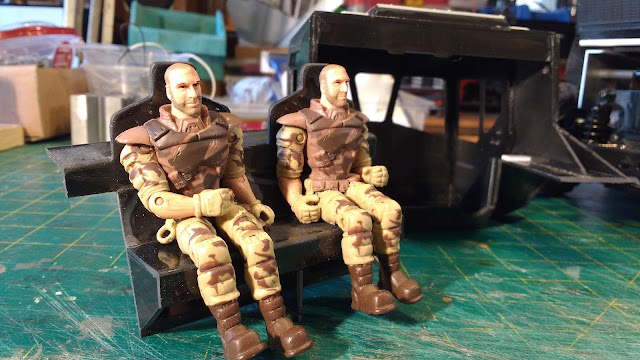 More detailing has been added to the roof and the rear door completed. The communications dish was made by putting a bit of 1mm black styrene over the end of the vacuum cleaner hose and heating it with a heat gun with the vacuum turned on. It was a pretty crude way to do it and I had many attempts before I got a usable evenly shallow dome. I really should build a vac former.
Twin red LEDs in chrome bezels were added for rear lights on each side. 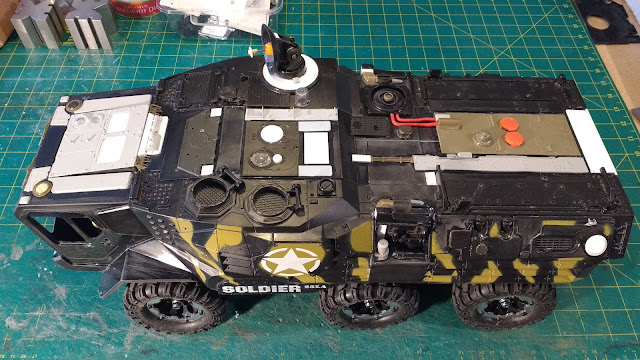 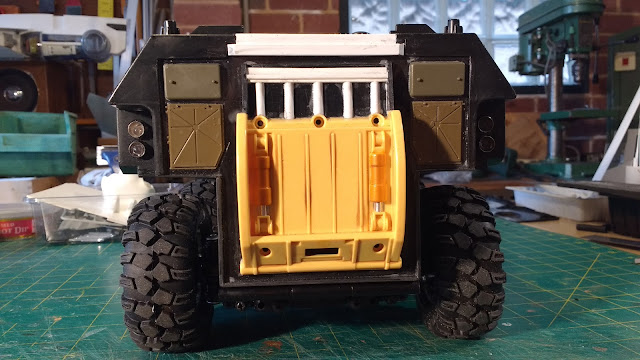 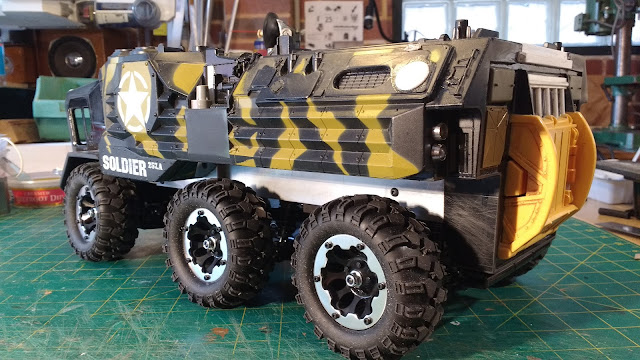 Like I say every time, I am hoping to finish this project soon (along with the Reverse trike Project), but as this is quite a small project in size there is every chance that may happen.

Thanks for reading.
More soon...