Along with the recent work on the Resilient Cruiser,  I have started to rebuild the front of my oldest unfinished spaceship project, started in around 1995.

If you have read the original post you will know that I was never happy with the front end of this spaceship and so it was left abandoned for a very long time. In fact I always found the front end of a spaceship to be the most difficult area to complete to my satisfaction.

A few years ago a charity shop visit resulted in finding a baby's toy cement mixer with an interesting shaped mixing drum. This was found to have a similar radius to the plastic lampshade that comprises the mid section of this Old Unfinished Spaceship.
In a more recent charity shop visit I came across a strange toy that had an interesting form. What you did with the toy was a total mystery but the shape suggested a sort of half a UFO. I put it down to look at some other stuff and then left the store forgetting this mysterious toy completely. The shape however remained in my mind and I slowly realised it would make a perfect front for this project. The next weekend I returned to the charity shop and it was nowhere to be found. So I have been searching for many weeks to try and find something that would fit the bill. Then I noticed a cheap (only $3.00) plastic ( styrene or acrylic) salad bowl in the supermarket. It is supposed to be used once and discarded which seems a bit wasteful. But for my purposes I figured I might be able to cut off the bottom and then cut that part in half to make a shallow half saucer shape. 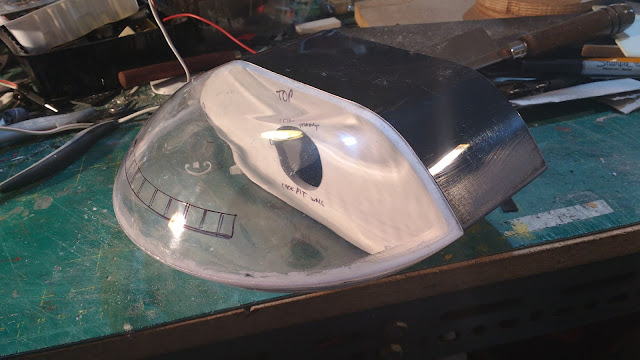 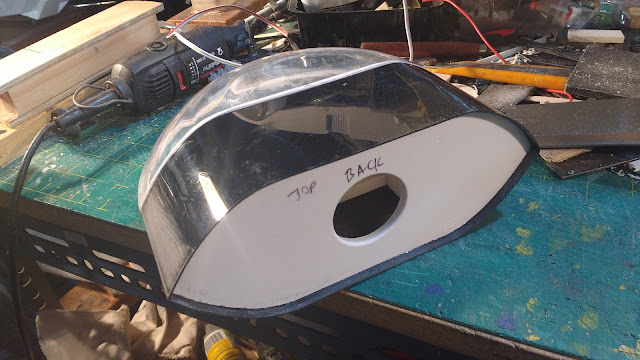 That half saucer shape is then mated to a 6mm foamed pvc structure, skinned with 1mm styrene sheet glued on with thick superglue after first roughing the styrene surface with coarse sandpaper. The saucer is press fitted so it can be removed to eventually install a simple cockpit interior that will be lit with leds. The scale looks like it will be 1/72 so I have dragged out some 1/72 German soldier figures from the Hasegawa Leopold kit.

The cement mixer drum was cut in half and glued to a 2mm styrene structure with pvc pipe halves added to the sides. This mates with the old mostly completed back section with a piece of PVC pipe and a box section. 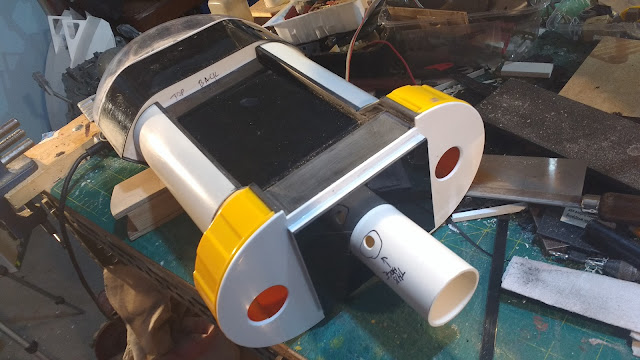 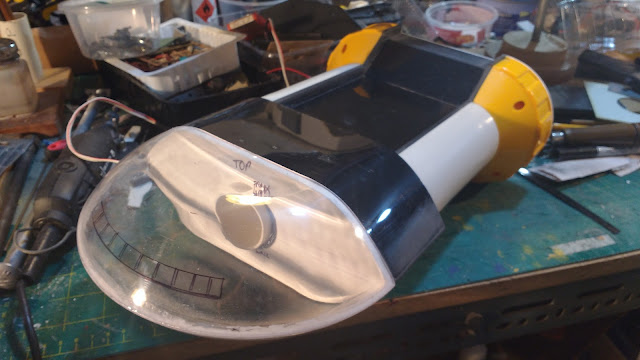 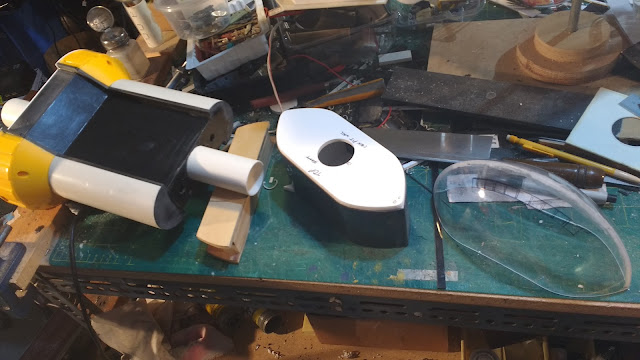 The old back end was modified internally so that it now has a block of PVC tapped M12 for a support bolt from the top and bottom. 12 volt DC power connectors were added and wired up for the future cockpit lighting. Getting access to the engines for lighting is problematic so I may not bother. When I made the original model way back in 1995 I didn't consider adding lighting or a support rod. 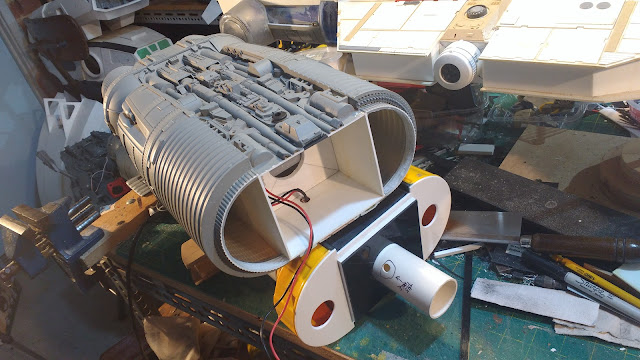 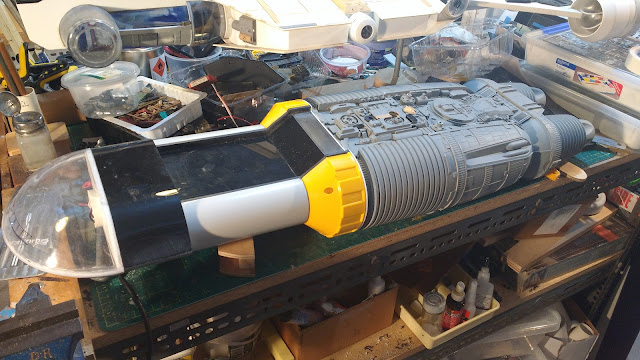 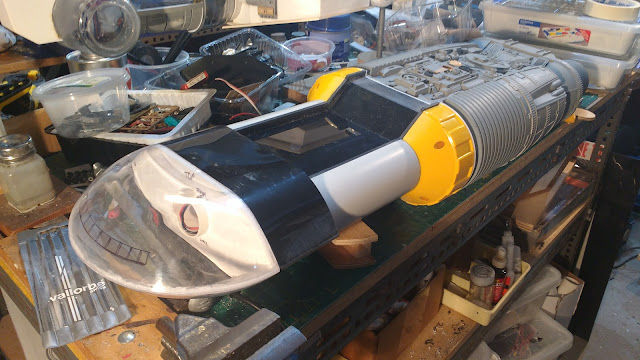 Below is a view of the mostly completed and grey primered back end circa 1995, now mated to the new front structure of 2019,  a period of 24 years separates them. Observant readers will notice that the top surface detail of the old back end section is used for the background image of the rcscifi blog header. 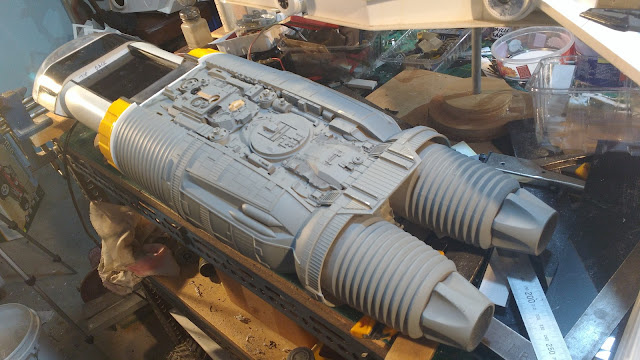 The engines are two ribbed acrylic cups with acrylic tap handles glued on the end. Forward of the engines the main hull is a plastic blender jug cut in half and separated by a styrene box structure. After the blender is a ribbed lampshade also cut in half and added to the box.

You used to be able to get  lots of useful styrene, abs and acrylic plastic shapes but not any longer, they are increasingly harder to find. Most toys and domestic products these days use a safer form of plastic (without the more toxic plasticisers of old), poly-ethylene, poly-propylene and BPA free poly-carbonate which are all in my opinion useless to the serious found object modeller as they cannot be reliably glued, puttied, painted or sanded.

Its only been 3 years since part 1 (September 2016) but I am back on the Resilient cruiser.

See this blog entry from 2013 Unfinished Old Spaceship model Part 1 for the background story to this project.

As it happens the Resilient criuser part one page is the second most popular page on rcscifi.
Why that is, is a mystery to me but the photos feature on a lot of Pinterest pages which result in clicks coming from Pinterest going to the page.

I have started to detail the upper surface.

I was given a box of old broken transformer toys which took me a long time to disassemble into their constituents keeping the styrene and ABS parts (as well as the screws) and junking the rest. You will see a few of those bits show up on this project. 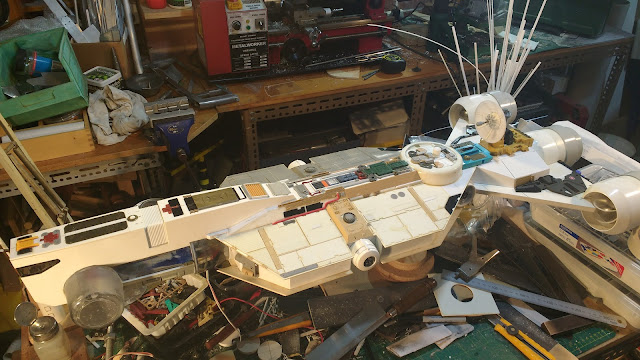 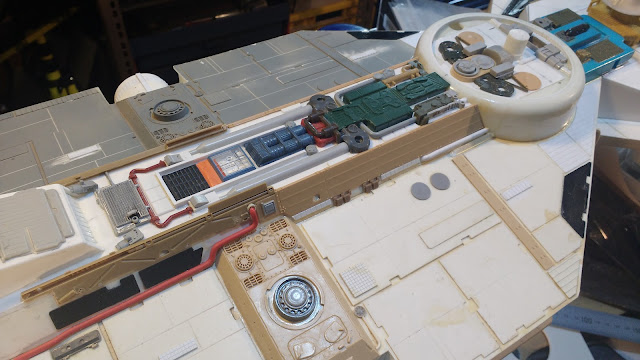 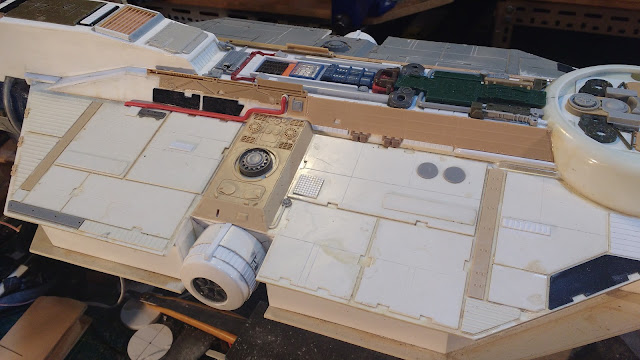 I also started on the Com tower using one of the small battery powered push light domes for the dish.
I have some other smaller dishes to add to this tower in keeping with the Ep 1 Radiant VII influence. 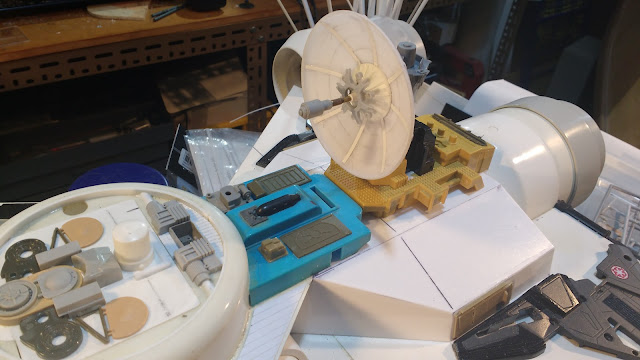 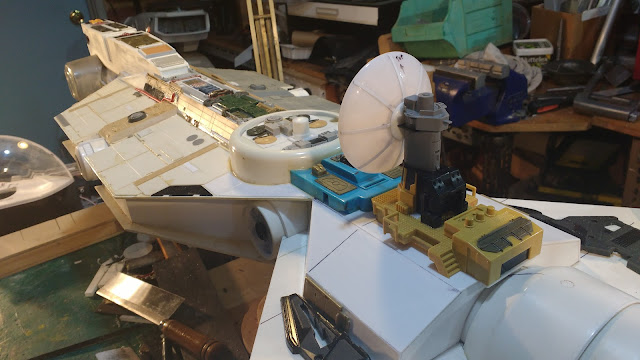 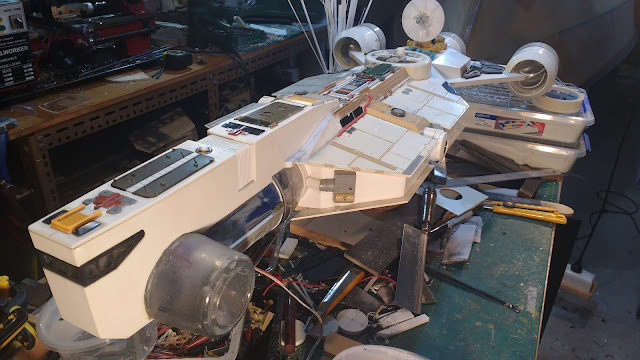