I wired up and installed the Pololu rc switch using some cut up servo extension leads as plugs. These switches work a treat. They have an onboard flashing surface mount LED that blinks mostly off when the switch is off and mostly on when the switch is on. I covered the tiny board with clear heat shrink to insulate the contacts and to be able to see the led indicator working. The switch defaults to off so when you power up the RC receiver the switch is open and a push of the required control (in this case a button toggle) activates it. Pressing the button again switches it off. The button on the controller of the 3 channel wheel radio is usually employed for such tasks as changing gears on a two speed electric vehicle. If you put a servo on that channel, toggling the switch makes it travel from the equivalent of fully rotated right to fully rotated left. Toggling the switch again has the reverse effect. 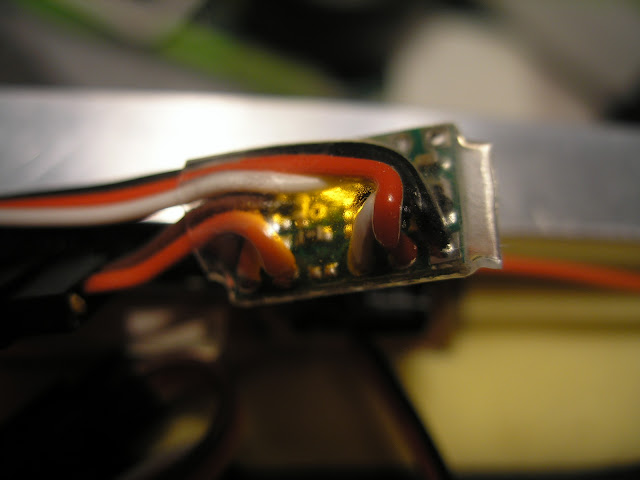 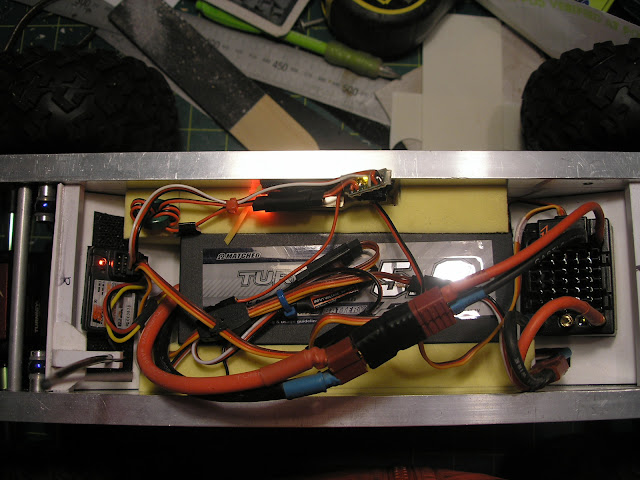 I decided to add some rear red LEDs for tail lights. The forward voltage drop on these clear red LEDs is about 2 volts each, I have a 6 volt supply. I used the handy online led resistor calculator provided by the company I buy the LEDs from, to calculate the required resistor for the two LEDs in series at 6 volts. This was a 150 ohm 0.5 watt resistor soldered before the LEDs in series on the positive rail.
The LEDs are mounted in chrome bezels. They are retained in the bezel by a poly ethylene plug which goes behind the LED and just pushes into the back of the bezel relying on friction to stay in place. This is not a very satisfactory system as you can easily push the LED back out of the bezel from the front. I put a couple of blobs of hot glue behind to prevent this from happening. I made a removable styrene cover to hide the wiring underneath. It attaches with a couple of plastic thread screws salvaged from a disassembled toy. 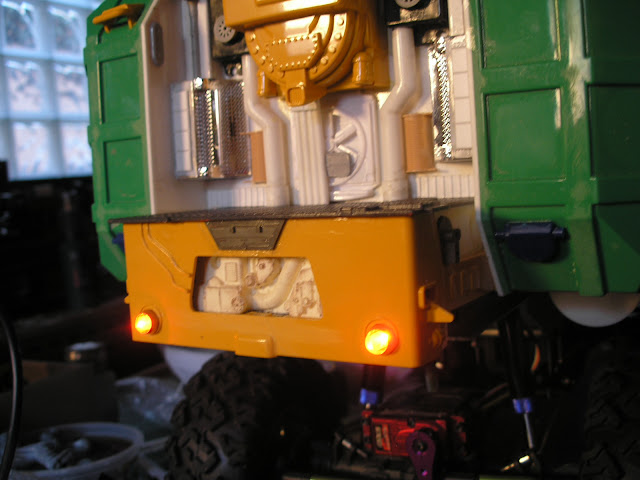 The cockpit console also has a couple of bright white LEDS buried in the cockpit console. The bright whites drop 3 volts each so didn't need any resistor. A model kit part was used as a dual screen console with a bit of thin acrylic (perspex) sanded with fine wet and dry to frost it on the back, glued in behind. Some silver paint was added as a bit of a reflector before gluing in place. 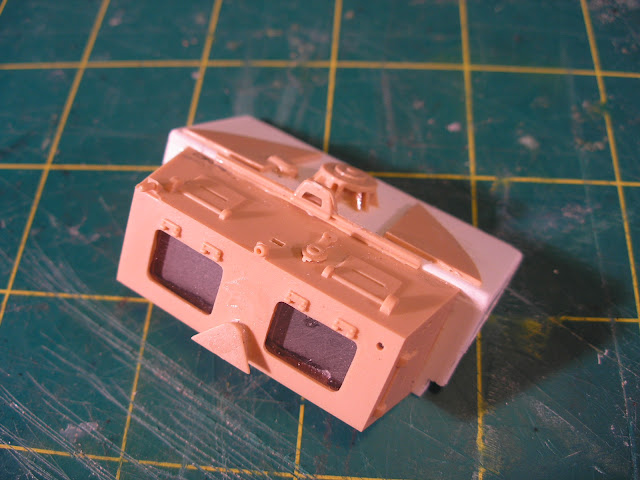 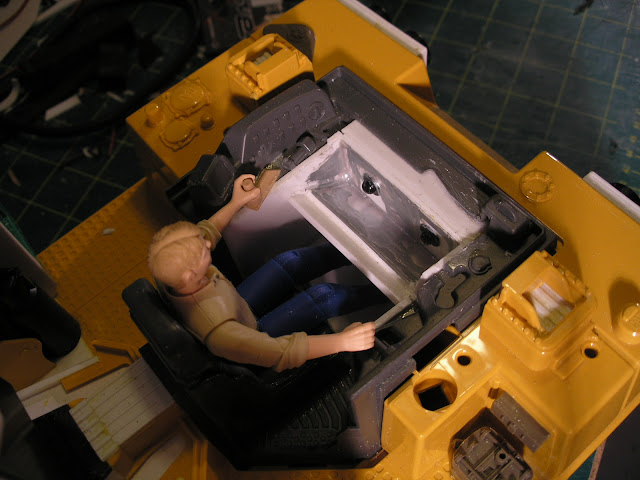 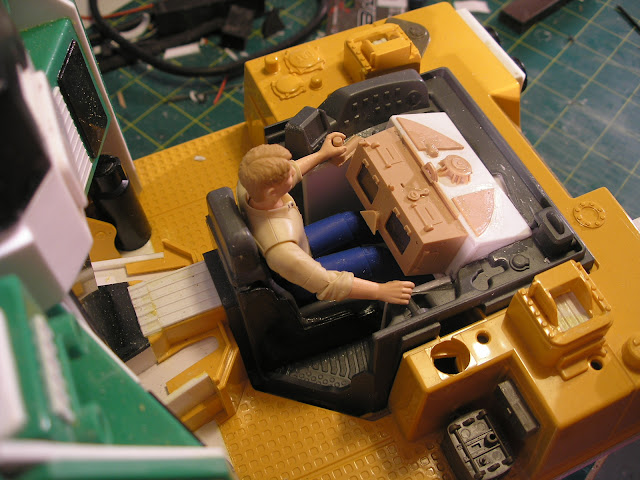 The console illumination is wired up to the same feed as the headlights. 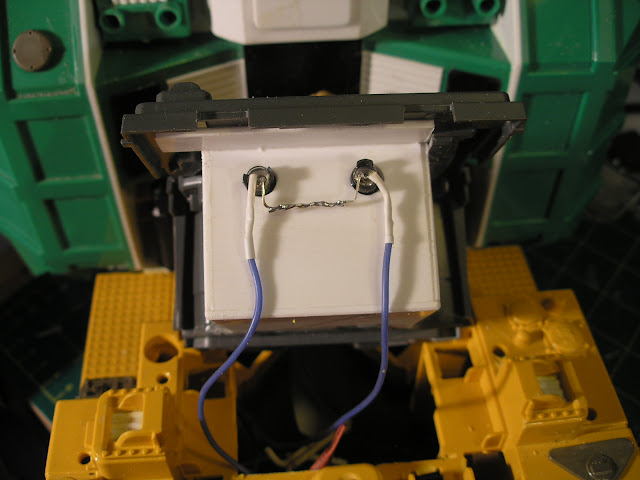 The screens throw up a small amount of light onto the driver figure. The photo below is a longish exposure and shows it much brighter than in reality. 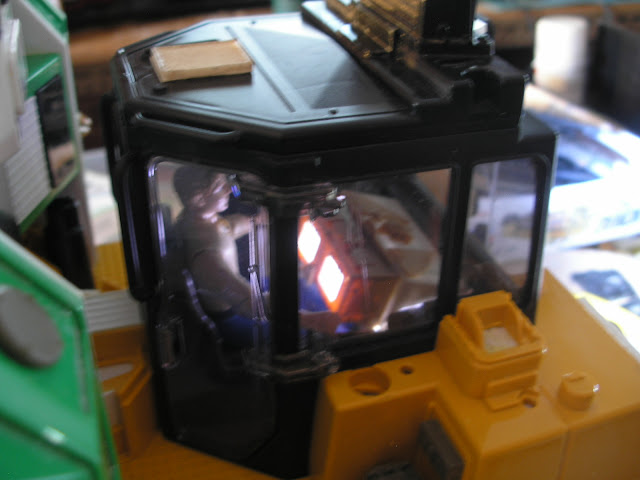 The driver figure has a plastic thread screw through the chair into his coight to keep him seated. 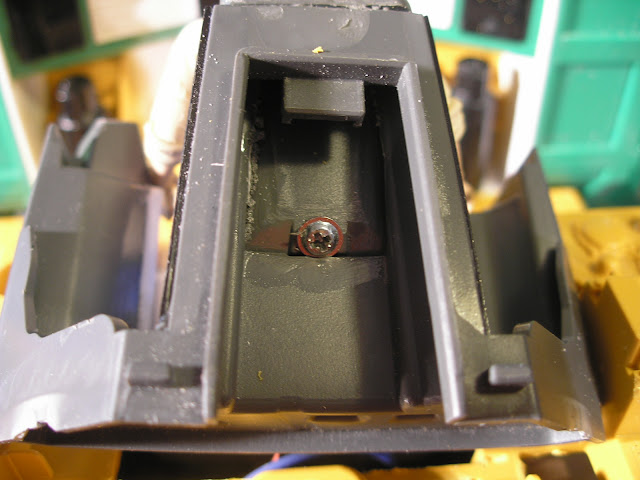 The Bruder toy's clear plastic windscreen has a wiper blade molded into it. It will get painted or may have to be detailed with some styrene strip. 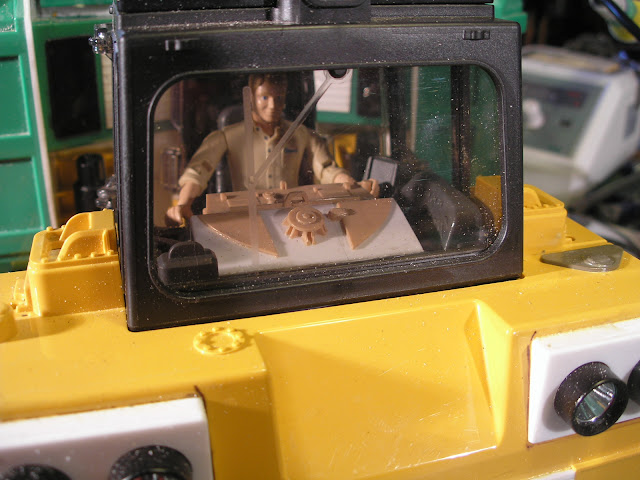 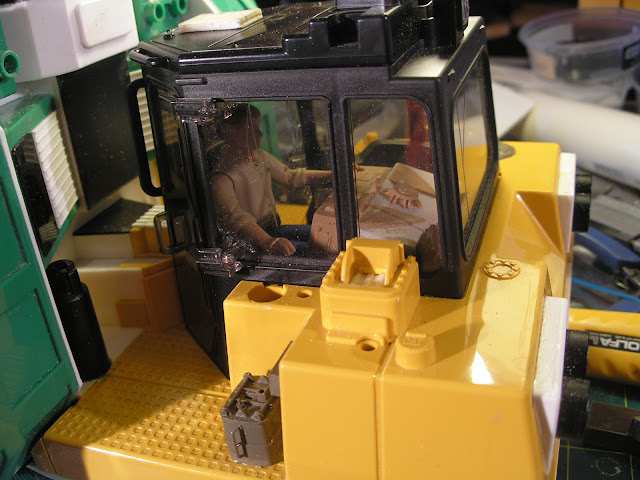 I also removed the old push switch casing that was on the side of the cab and covered the hole with a kit part or two. 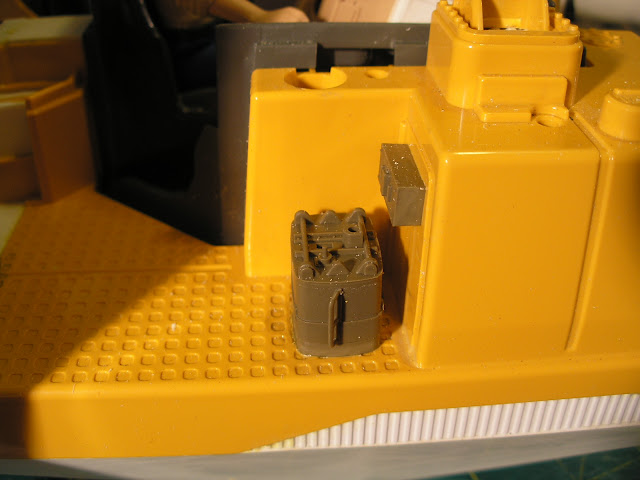 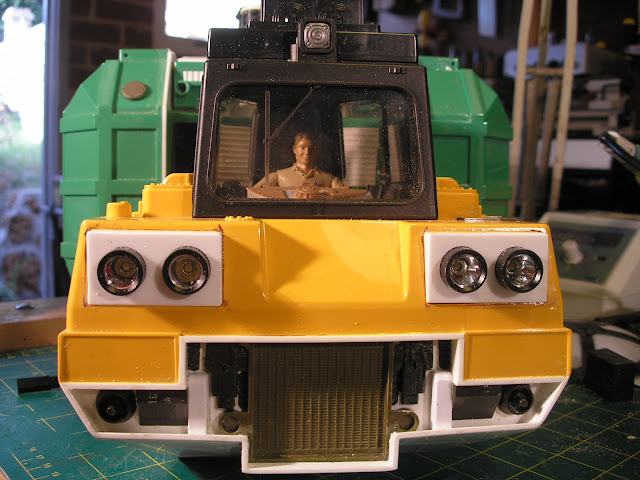 I've added a few more kit parts here and there, mostly at the front. 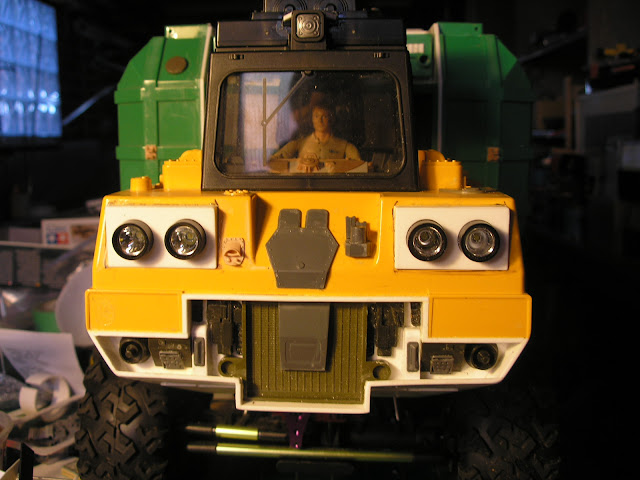 The lower sides of the cab have been paneled and I added some smaller tanks on top of the larger ones to more fill the truck toy's rear wheel arches. 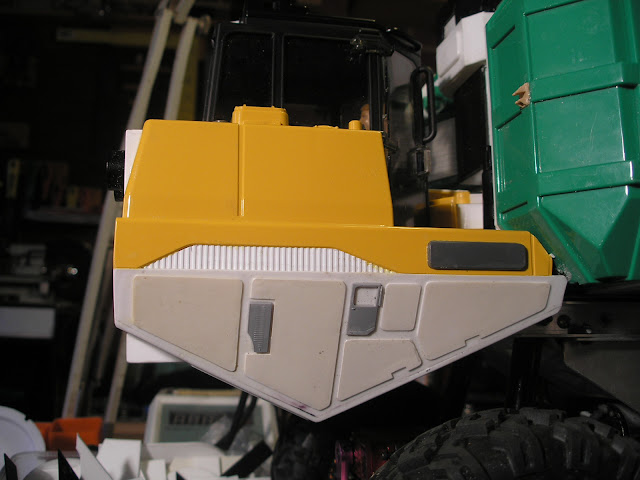 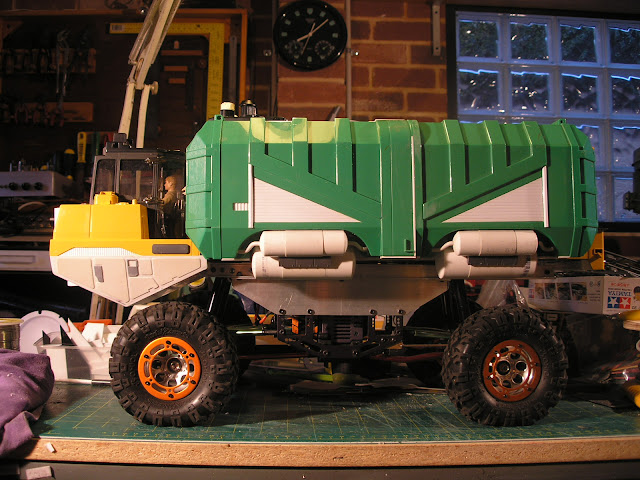 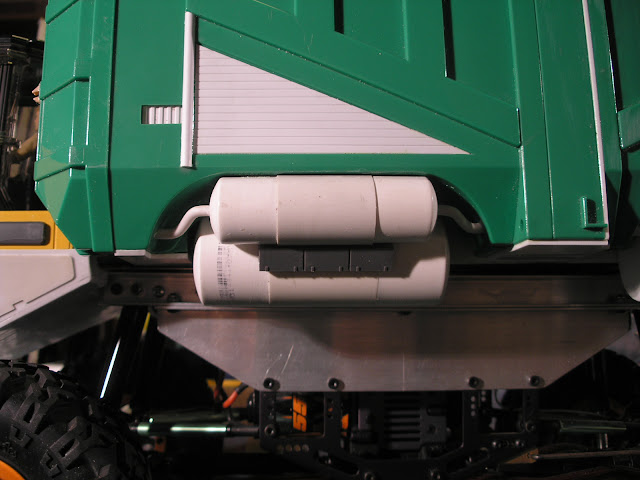 The piping for the smaller tanks is made from some single conductor electrical wire. It is cheap and easy to obtain from a hardware store by the metre. It is also easy to bend, stays bent, paintable and the pvc outer insulation is able to be securely glued with either thick or thin superglue. It can be straightened by just clamping one end in a vice and pulling the other end. You can get a few different sizes, the two pictured below are 4mm and 2.75mm in diameter. Multi strand wire is no good as it cant hold a tight radius bend. You can sometimes find this stuff in skips on building sites, though with the price of scrap copper these days it is harder to find for free. 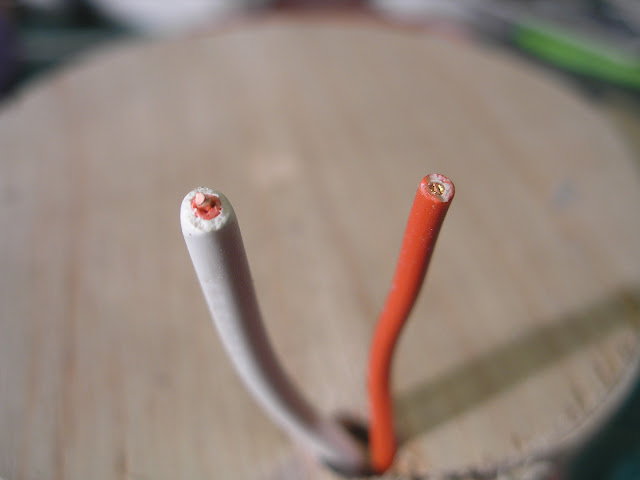 There is an empty space on the chassis between the wheels that I am toying with filling with some detail or other. I would also like to do a bit of work to the driver before finally cranking up the primer and beginning the paint process. Mechanically and electrically the vehicle is complete and working.