Ultraman Towards the Future AKA Ultraman Great part 14

In one episode I made a breakaway miniature agricultural shed for a Locust creature to trash.

The giant Locust critter called Majaba was made as a puppet. It had leds inside its eyes to make them glow as well as a pretty cool translucent paint job. 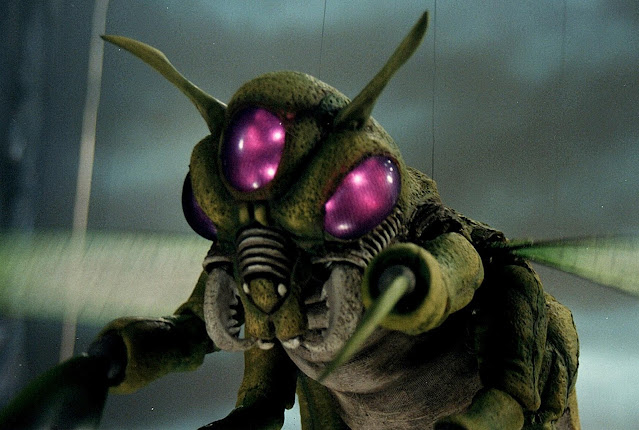 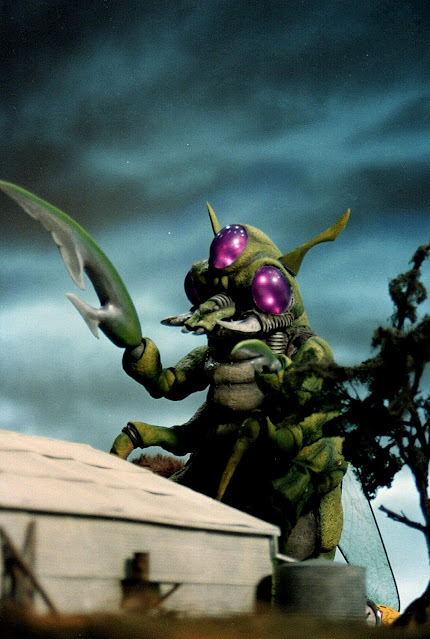 The picture below shows the puppet and miniature shed waiting for action to be called. The shed had to match the one filmed at the live action location. 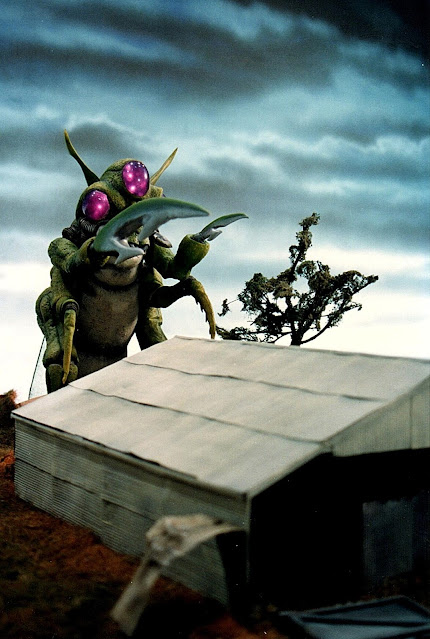 Here, the puppet is in the middle of destroying the miniature shed. 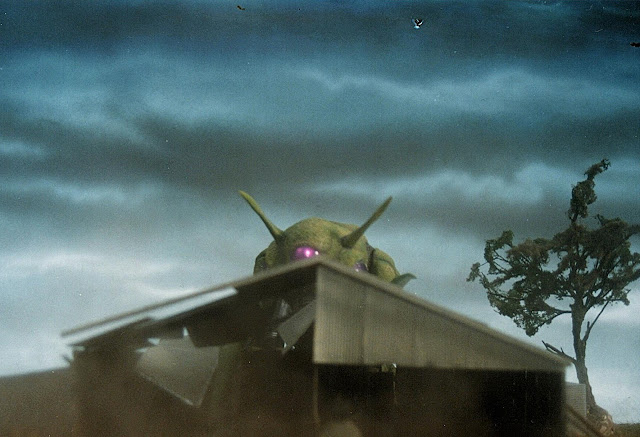 The shed was built on a solid chipboard base with a balsa wood timber structure lightly superglued together. 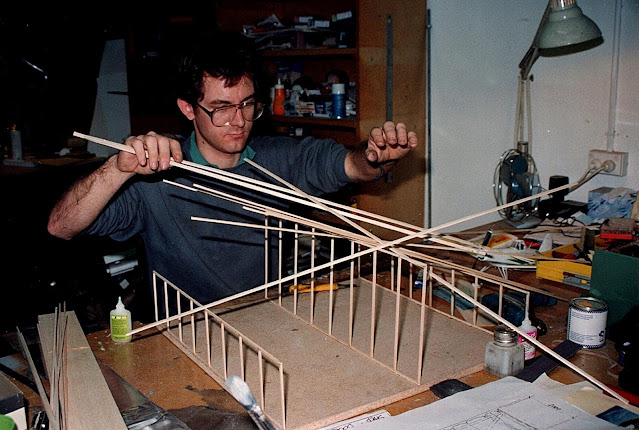 Paul Fardouly (left) rigged up a press so we could stamp out corrugated sheets of aluminium fin stock with the correct scale corrugations. On the right you can see the completed balsa timber framing that has been stained a dark colour. I am in the process of attaching the miniature corrugated sheets to the structure using small dots of superglue and zip kicker. This had to be fragile to break apart easily. 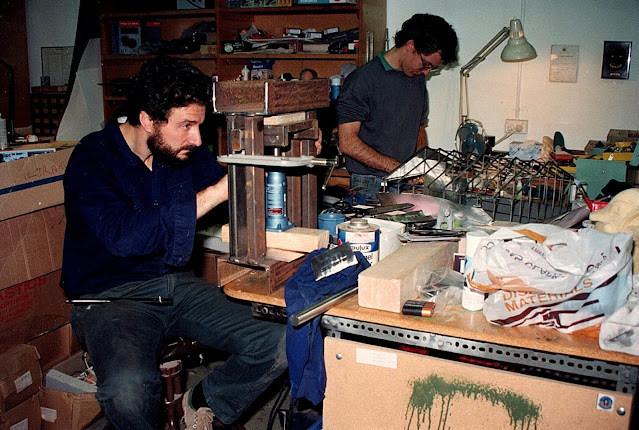 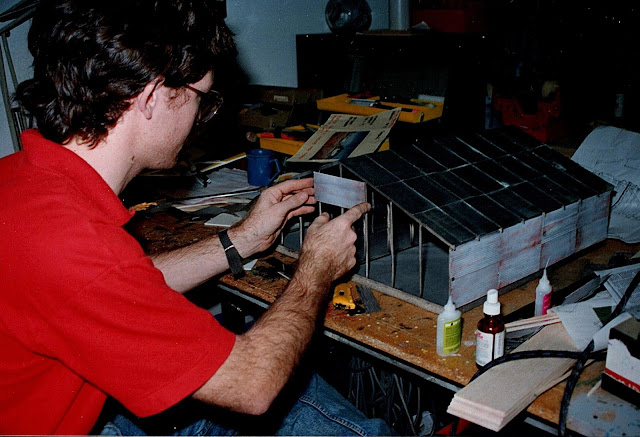 The puppet was also used for flying scenes and had a motorised wing mechanism built into it. 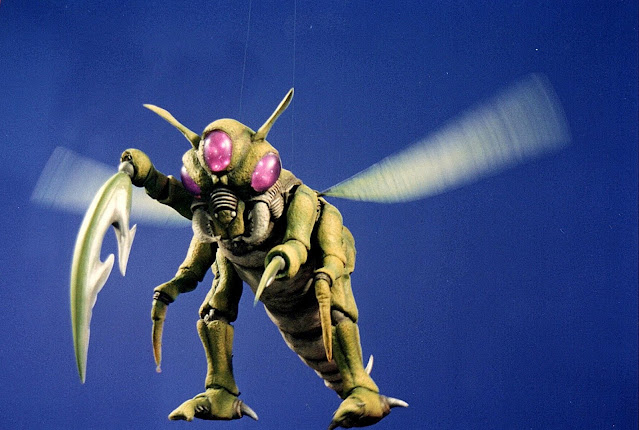 In the episode the creature meets a fiery demise so the puppet was rigged up with some pyrotechnic material that was electrically ignited during the shot. You can see the ignition wires running down the side of the puppet. 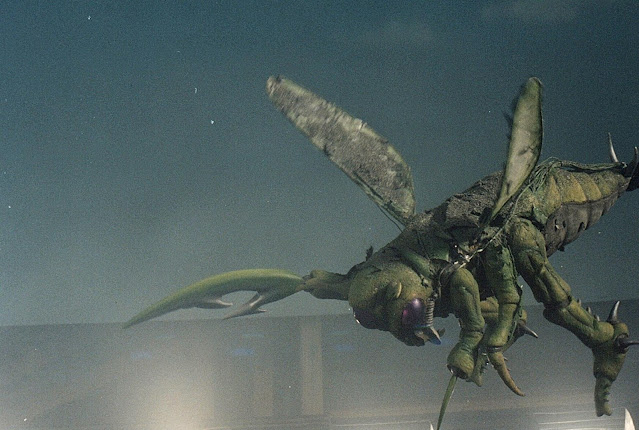 The pyrotechnic material was ignited and the puppet performed as designed. 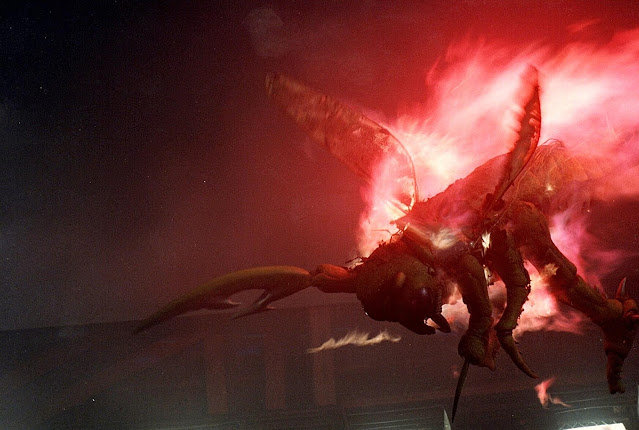 Ultraman Towards the Future AKA Ultraman Great part 13

Quite a lot of the miniatures in Ultraman Towards the Future experienced some form of pyrotechnics or other as evidenced by previous posts. This is a selection of other things that went bang.

Here I am, hammer in hand, making a modification to a breakaway structure on top of one of the buildings originally made for the aborted 1987 Total Recall movie which the Ultraman production acquired.  Steve Newman the DOP is on the right and Paul Nicola visual effects supervisor looking through the second camera bottom left. 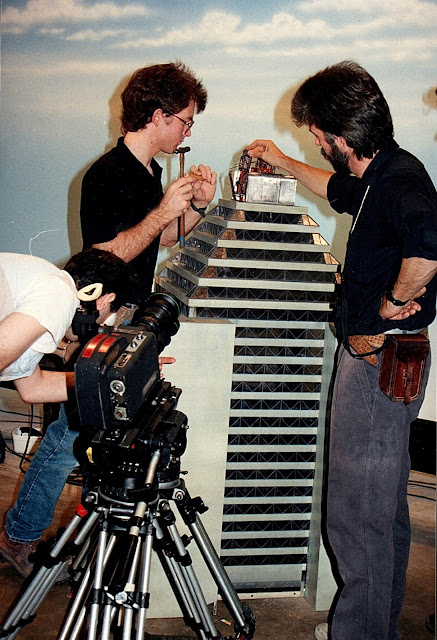 I added the small structure at the very top which was meant to be some sort of service equipment. It had a series of corrugated aluminium panels made from fin stock surrounding a small tank structure and random nurnies all lightly glued together to come apart easily on impact. 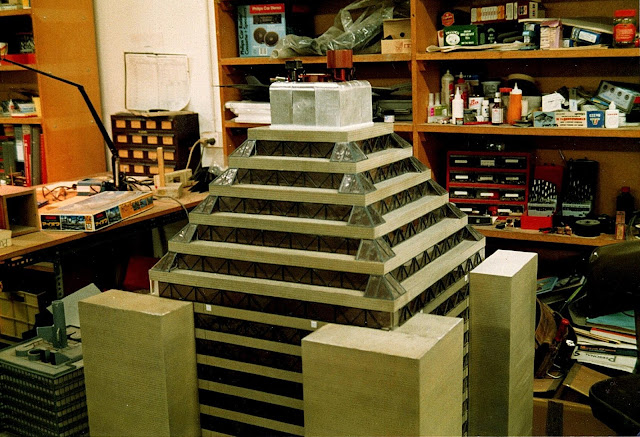 The action was as you see here a glancing blow from a UMA Hummer which was thrown off course due to the extreme halitosis effect of the monster. 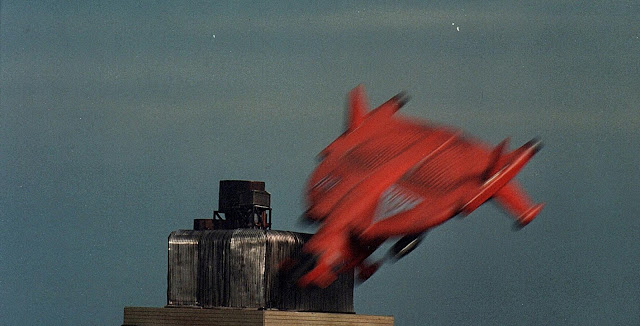 On the off camera side of the building was an electronic motion sensor that triggered the pyro as the Hummer sailed past. The Pyro effect was by Alan Maxwell. I believe it was napthalene flakes added to the black powder that provided the red rolling fireball and oily black smoke. 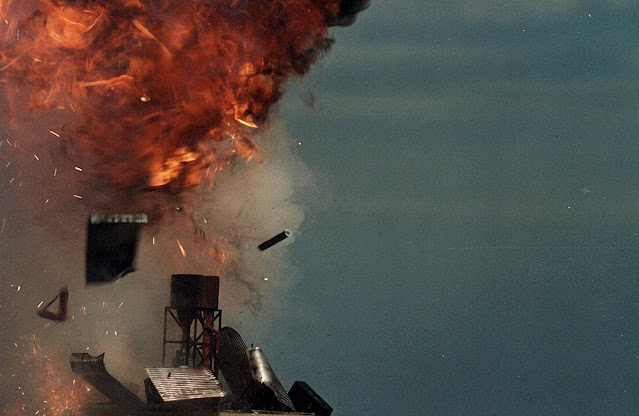 In the pictures below you can see the motion sensor and its wiring taped to the right side of the building model. The cameras were placed on the left side of this photo. 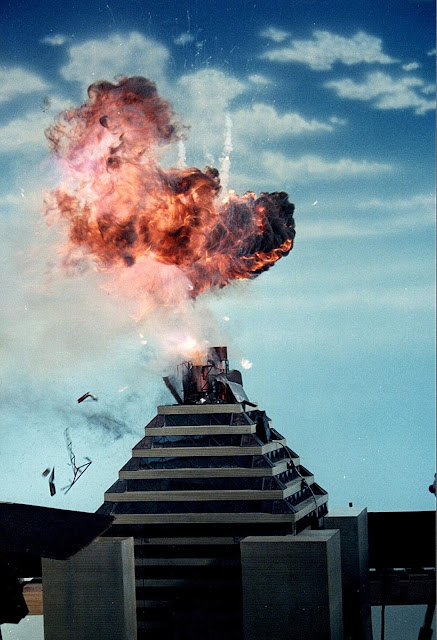 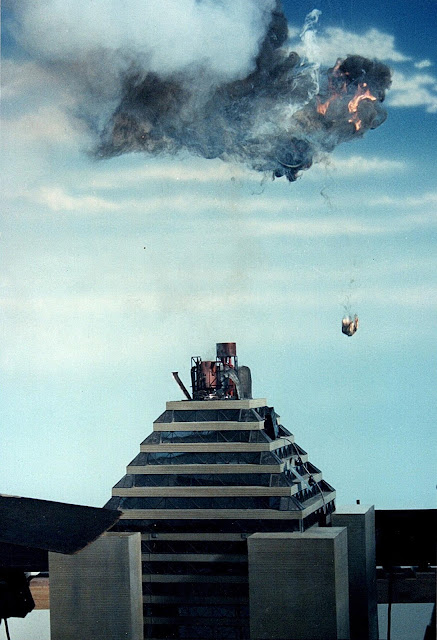 This sequence featured another Total Recall building that was modified with a ground floor shop. Hanging above the shop-front awning was a large scale monster foot filled with lead weights. The ground floor shop and its contents were built by David Tremont. Scale is 1/24th. 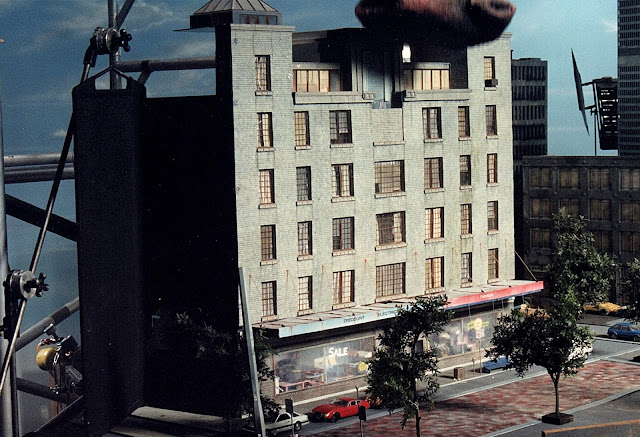 The foot was dropped and the pyro ensues. In the rushes the next day, the footage from the Photosonics Actionmaster camera at 500 Frames per second was pretty spectacular. The miniature shop was filled with various tiny model furniture items and a table and chairs could be seen flying out the window towards camera through the fireball. You rarely get to see all that action in the episodes as the pyro shots in the show usually cut away quite quickly. In the shot as it appears in the episode, you do see the table starting to come out of the fireball but it cuts before you see a chair. 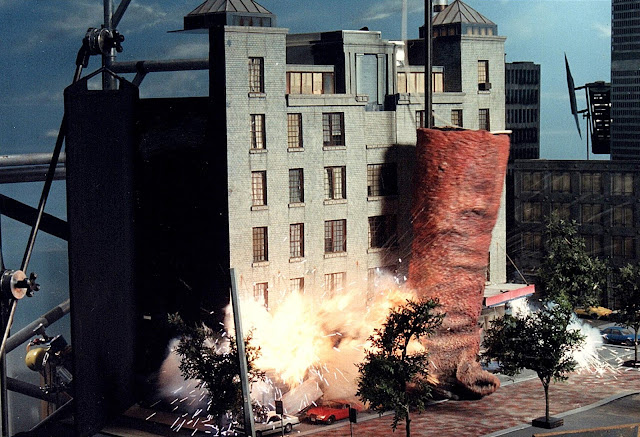 TThe picture below shows the aftermath. Paul Nicola the visual effects supervisor with yellow face shield is standing behind the Arri SRII along with Joanne Parker the camera assistant. The Photosonics Actionmaster camera is on the right. Alan Maxwell responsible for the pyro effects is behind the scaffold at the back. 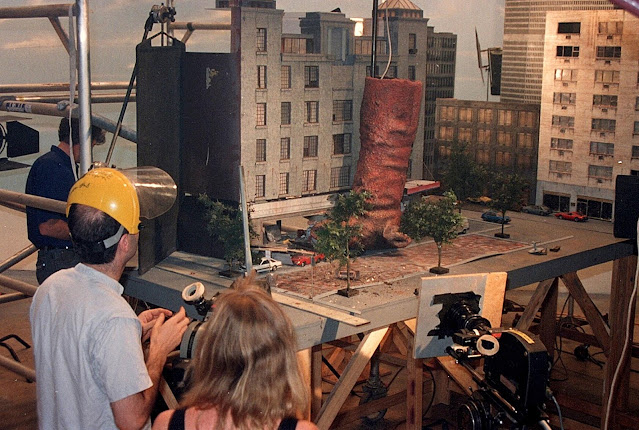 Here, I am in the middle of assembling a 1/25 Italeri tanker truck plastic model kit that was later filled with a sequenced pyro effect for a shot of it exploding. It was a one take affair as there was no time for making another one. As it happened the Photosonics Actionmaster camera, which was the hero camera angle, jammed right on the cue to fire the pyro and we only got the shot from the alternative camera angle covered by the ultra reliable Arri SRII at 250 frames per second. A small joke in this photo is the little jimmy figure with his head in the vice. 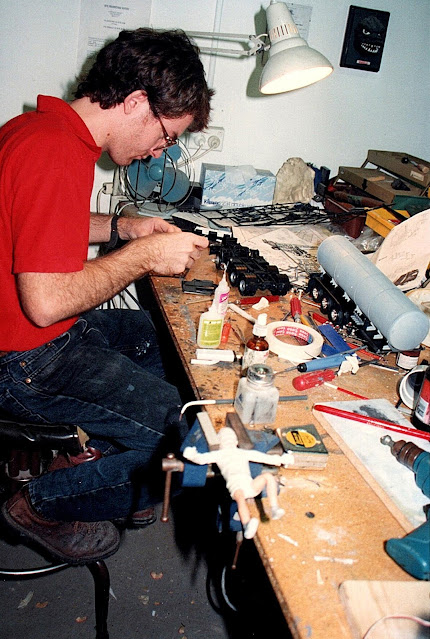