I thought it might be interesting to look at some of my old Spaceship models starting with this one. While this model is not strictly an RC vehicle, it is most definitely SCI-FI and it proves that I do sometimes actually complete a model. This was made in the early 90's so its about 20 years old and  the length is 880 millimetres.
I have never been interested in building replicas of famous craft, I always wanted to build my own designs, and I particularly find enjoyable the process of arranging found objects into something new. You get arrangements of shapes that you would never have come up with if you just sat down with a pencil and paper and tried to design it from your imagination. 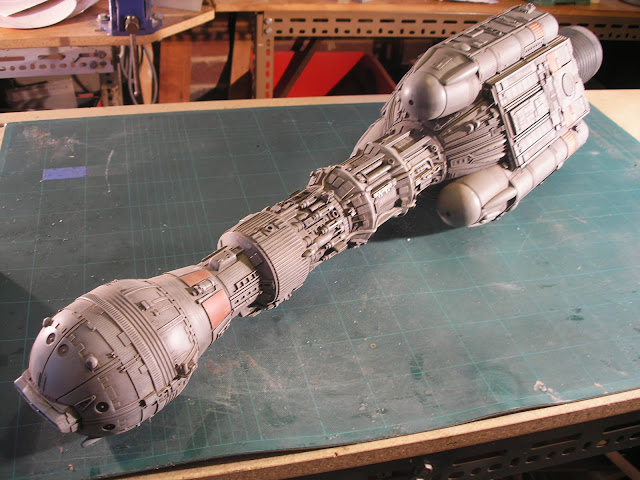 The front ball shape command module was from a baby's toy that rolled along the ground with small coloured balls inside. The window section is an upside down front of a 1/25 American car kit. 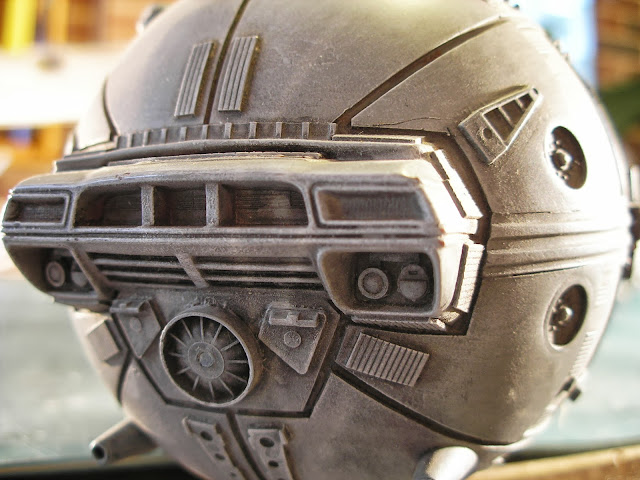 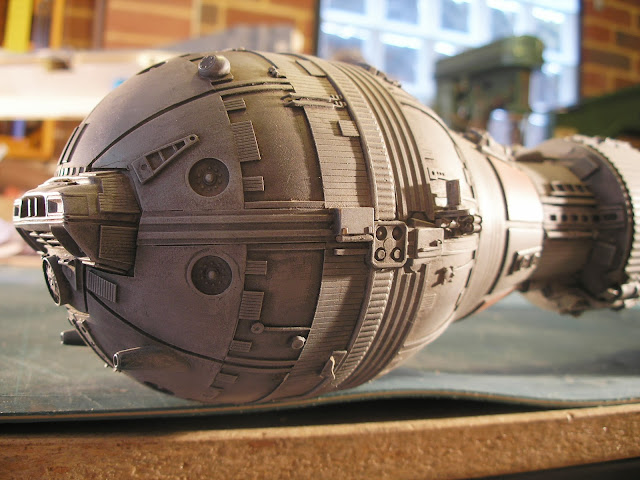 The neck was made from some PVC pipe which had been heated at one end and stretched into a cone shape. These PVC shapes were sourced from the industrial model making company I used to work for early on in my working life. They were reject pile guides made for a 1/33 scale North West Shelf gas platform model. In Western Australia there were a lot of these "plant and piping" models being made for the many resource projects in this resource rich part of Australia. When I started there in 1985 I was working on the plant and piping models for the Argyle diamond mine project. The models were built as part of the engineering design process and featured all the complex pipe runs through all the plant areas. The models were used as a double checking process, to check that all the engineering drawings were accurate and to see if there were any obstruction  and clearance issues. The piping drawings were all isometric, just bent lines with dimensions. Sometimes errors would crop up, A pipe going through the middle of a steel girder or machine etc. The engineers would visit and have little 1/33 scale men on rods to poke about in the models to check head clearances and so on. All the piping and vessel parts would be from EMA, they used to have a massive stock of the stuff. Of course all this is done with a computer these days... ho hum. 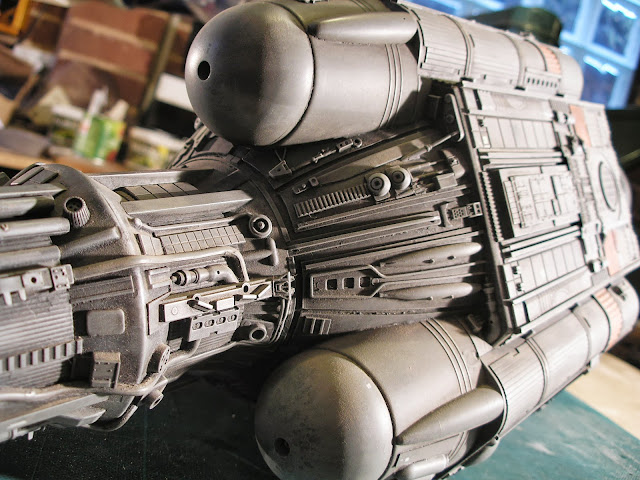 The little dome shapes are plastic fishing float cut in half, glued to small plastic jelly molds. The main rear hexagon was a plastic terrarium with a plastic bowl glued to each end. Note the plastic coffee stirrer detail, the paddle shape with three square holes. Can you still get these? 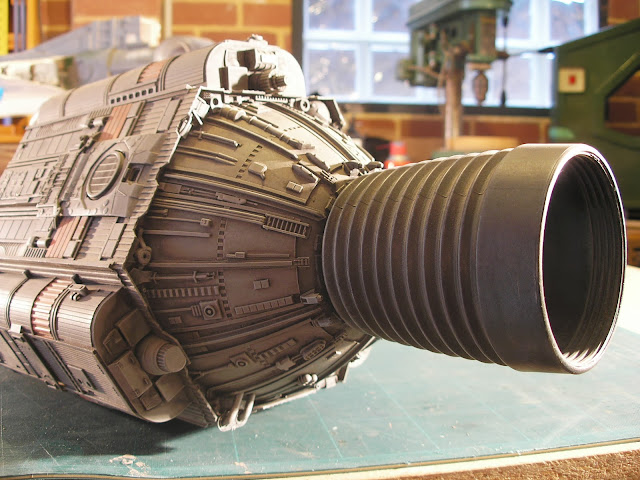 
The paint finish is just the usual primer grey with some orange accents. It is heavily weathered with an application of my special "Poo Juice" mix which consists of roughly one part Tamiya Flat black to 5 parts Methylated spirits. This is liberally applied to all the nooks and crannies and left to dry. It is then wiped off with a metho soaked rag leaving it only in the panel lines and crevices. This will only work if the underlying paint does not dissolve in alcohol, so acrylic car primer and turps based Humbrol enamels are fine but other water based hobby paints which are alcohol based (like Tamiya) are no good. In fact even the enamels and the acrylic car paints need to have been dry for at least a couple of days before wiping over with alcohol ( metho). After this has dried completely I then dry brush white students artists acrylic paint over the raised areas. The student acrylic is very thin and transparent, so it just ends up lightening the raised areas in a pleasing manner. I use a palette of wood for the dry brushing which helps to suck up some of the moisture in the paint, making the dry part of dry brushing a bit easier and I use a very stiff oil paint brush. This is probably pretty crude for those used to subtle pastel shading on military models but in my experience of models for film and TV, you need to really exaggerate the weathering for it to show at all. The old rule of thumb when estimating what would ultimately be visible on the screen for model making was to squint your eyes, if it isn't visible when doing that, it wouldn't be visible on the screen.