Here is another look at some more of my most used tools used to make holes of one sort or another, starting with my lathe, the tiny but very useful Emco Unimat 3. 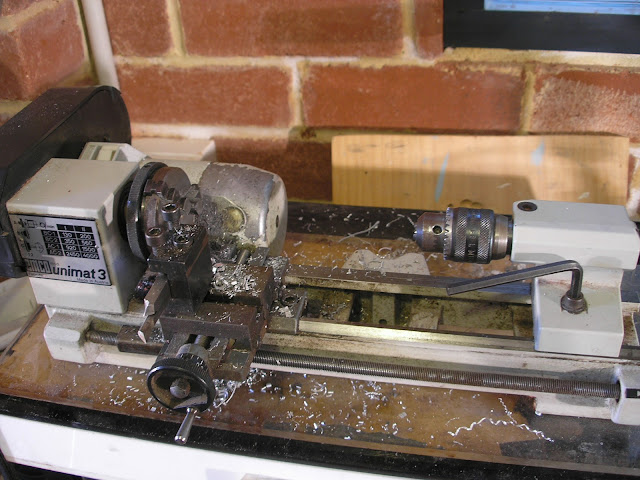 I use this all the time for turning up spacers, drilling out links, tapping holes in the end of link rods etc. I got this second hand in 1990 for $400 Australian dollars which at the time I thought was pretty steep. It is very well made and the only problems I had was constantly breaking the rubber O ring belts and they were pretty hard to get and expensive to replace. For a long while I was making my own belts from that flexible plastic tubing used to push into a slot to secure flyscreening material in its frame. It was easy to heat up the two ends with a heat gun and push them together to make a belt. This would periocically break and have to be re-joined. Now I have discovered that there are people who make very good quality urethane belts and sell them on ebay at a decent price. The urethane belts are very hard wearing, last for ages and do a very good job.
To get a tap to go in square and true to a link rod or spacer I remove the belt and turn the spindle by hand with the tap in the chuck and the tail stock free to slide.


As I have mentioned in a previous post it would be useful to get a 4 jaw chuck, in fact it would be good to get a bigger lathe as the size is really rather restrictive in what tasks you can carry out, for instance the biggest drill the chuck can only take is only 8mm but it is certainly a lot better than nothing. The other thing on my wish list is a small milling machine. It would allow me to make a lot of parts I currently buy and adapt, from scratch.

Probably the most useful tool is my drill press. It is a small 5 speed one made in Taiwan that I bought in about 1984. The only problem I had with it was the plastic depth stop bracket broke after only a year or so. I used it for many years without that facility, finally getting around to making a new one from PVC this year (almost 30 years later). It is still using its original v belt. Next to it is my 3 wheeler band saw, bought around about the same time and also made in Taiwan. Similar to the lathe this ones rubber tyres and belt wore out and have been replaced with urethane tyres and belt again provided by vendors on Ebay. Just a couple of months ago a tiny spring in the power switch broke. I took it apart, luckily a suitable stand in was found in my junk springs box and its back up and running again. 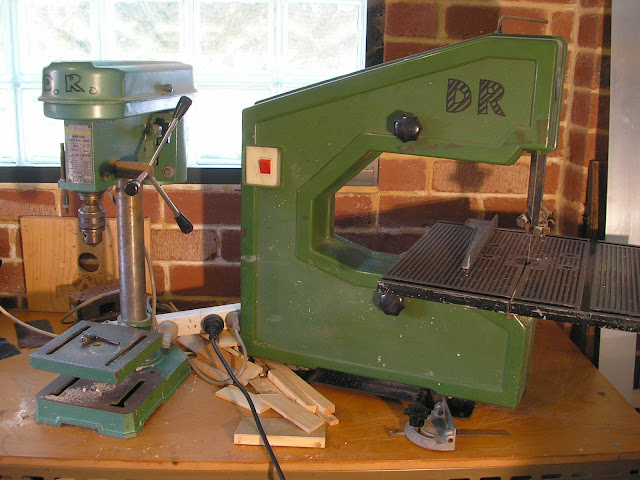 The following picture shows a pvc ring being made with the drill press, the central hole being made by a speedbore bit. This ring was then cut into two and further shaped to make the shock link adaptors for the Moon Bus project. 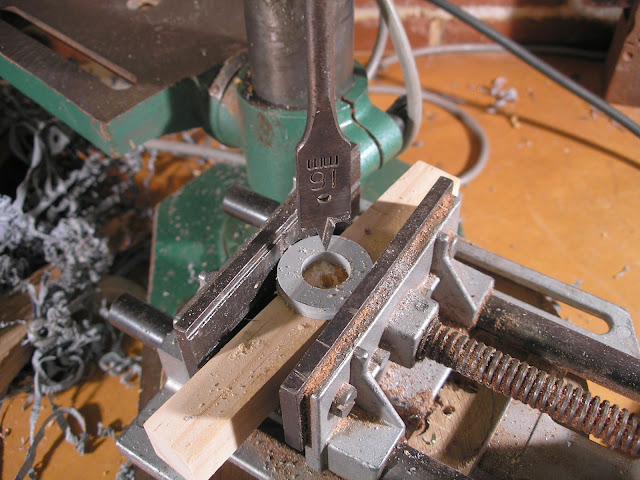 The next rotary cutting device I have found very useful over the years for making plastic discs and cutting large holes. The cutting bit can be rotated in the holder 90 degrees to cut either an inside hole or as shown here an outside edge making a disc. It leaves a 45 degree bevel on the waste material when cutting a hole which can be used as an interesting detail. The drill is run on its lowest speed when using this with a gentle feed and you need to keep your fingers well out of the way, preferably clamping the workpiece. 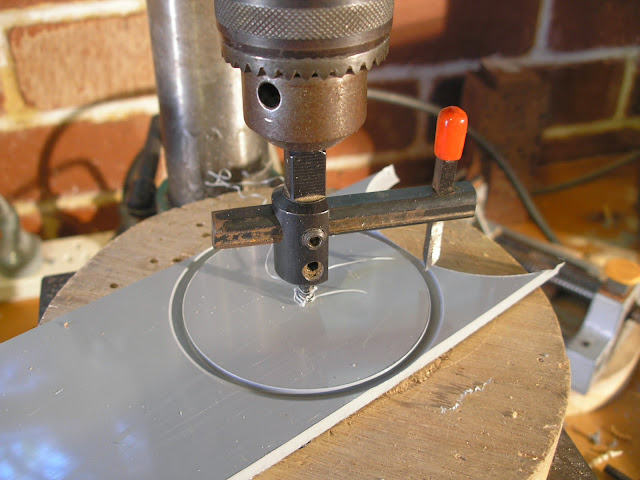 The following are the rest of my hole cutting tools. The step drills work really well on plastic and aluminium sheet. I have recently added to the step drill with a much larger one that can go up to 32mm, not shown here. Also not shown are three twist drill sets Metric 1-13mm in 0.5mm steps, Imperial 1/16 - 1/2 inch which rarely ever get used and another metric set 1-5.9 in 0.1mm steps a most useful set. there is also a drum sander that I often use in the drill press.
For disc cutting in thin styrene sheet I use an OLFA circle cutter. The trick is to turn it backwards to scribe a groove into the plastic. The thin sharp point in the forward direction tends to want to waver whereas running it backwards it stays on track. 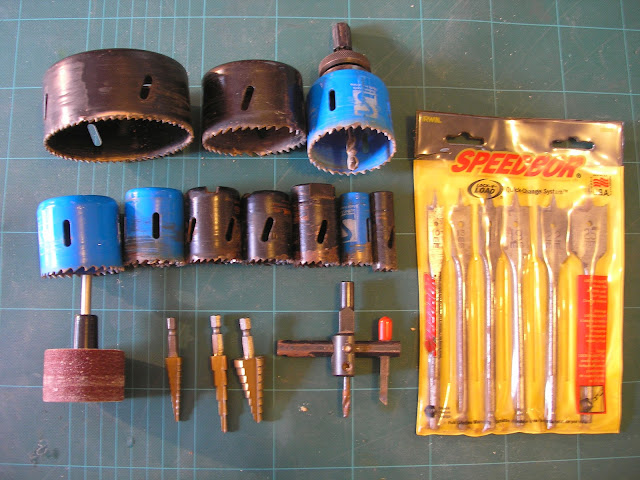 That's about it for hole cutting.
tools part 1
Posted by mung at 08:20

mung
Australind, WesternAustralia, Australia
I started in visual effects in the old days (1987) building and destroying models and miniatures. I wanted to be a miniatures supervisor, but in the 90's along came CG and that was the end of that. I had to re-train and for over 20 years I worked as an animator and compositor in CG. It was no where near as much fun. In 2017 I began work as an apprentice machinist and am being re-trained to operate manual and CNC machine tools.